Football is a game of raw emotions and sometimes that passion doesn’t end when the final gun sounds. Much of last week’s media focus was on the hard-hitting AFC North rivalry between the Cincinnati Bengals and the Pittsburgh Steelers. The teams played a great game that came down to the last few ticks on the clock. The Steelers came away with the 28-21 victory. Following the game, emotions were running high and the coaches from each team had to break up a scuffle that occurred.

Despite the attention the fray received, it really pales in comparison to a postgame skirmish involving coaches following a Chicago Bears-Los Angeles Rams game on Nov. 16, 1947. The game was played at the L.A. Coliseum and was a classic example of “student vs. teacher” matchup as Rams head coach Bob Snyder and his assistants Joe Stydahar and George Trafton took on their former coach George Halas. 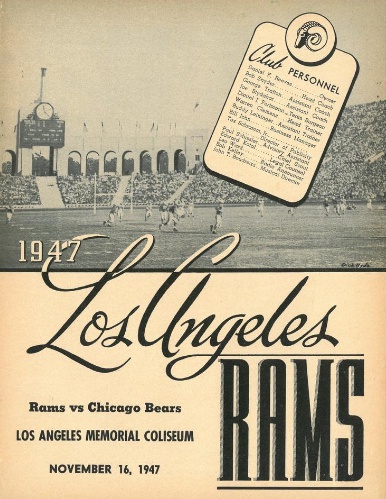 Tempers flared throughout the contest and unfortunately the officiating crew let the game get out of hand. The failure of referee Ross Bowen to keep the game under control prompted Halas to summon his entire team to warn them to “play hard football but cut out the rough stuff.” Five players were ejected and 16 penalties were assessed. Future Hall of Famer Bob Waterfield of the Rams was sidelined with a severely bruised jaw, at first thought to be broken, when he was hit by Ed Sprinkle after he had thrown a pass. Both Snyder and Trafton would later accuse Sprinkle of sucker punching Waterfield after the play.

The game ended with the Bears walking away with a 41-21 victory. But, the aggression and bad blood continued into the postgame. As the two teams headed to the locker rooms, Halas approached the Rams’ ball boy Buddy Leininger and asked for the ball he was holding thinking it was the game ball. Buddy refused to give Halas the ball and stated that it was league policy to turn the ball over to the referee. It was later learned Leininger wasn’t even carrying the game ball; it was a practice ball as Bowen had already retrieved the game ball.

After Leininger refused to hand over the football, Chicago’s 228-pound end Jack Matheson intervened and struck the 18-year-old ball boy in the right eye. Once Snyder and Trafton heard what happened, the former star players confronted Matheson in the training quarters with a few harsh words about the incident. The real fireworks flew when Matheson followed Snyder back to the Rams’ locker room and the fight was on. Players from both teams were scattered about the dressing room as a brawl threatened. But after Snyder landed a right hook on Matheson’s chin, the two were separated and cooler heads prevailed.

Once the excitement settled down, Chicago team captain, Hall of Famer Clyde “Bulldog” Turner, returned to the Rams’ locker room and apologized on behalf of his teammates. “Matheson is not representative of the Chicago Bears,” he said. “We are getting rid of him. You can bet on that.”

Matheson was suspended one game by NFL Commissioner Bert Bell and then immediately waived by the Bears. Three weeks later the two teams met again with Bell in attendance to monitor the teams’ behavior. The game was played clean and though the Bears jumped out to a 14-0 lead the Rams executed a furious comeback and won 17-14. The loss all but knocked the Bears out of contention for the NFL’s Western Division crown.

While extracurricular activities should never overshadow the game, the passion needed to play a sport like football needs to be immense with a feverish desire to win.