Let’s start this week off with a crazy stat.

After each starting the season 3-0 through three weeks, the Kansas City Chiefs, Dallas Cowboys and Los Angeles Rams are a combined 1-8 since then.

While this has dramatically shaken up the Power Rankings over the last couple of weeks, it also goes to show that Super Bowls aren’t won in September.

With that said, the Power Rankings for this week have some big shakeups, including a new top contender in the NFC and a team making their first appearance in top five.

Here are your official Power Rankings for Week 7 of the 2019 NFL season. 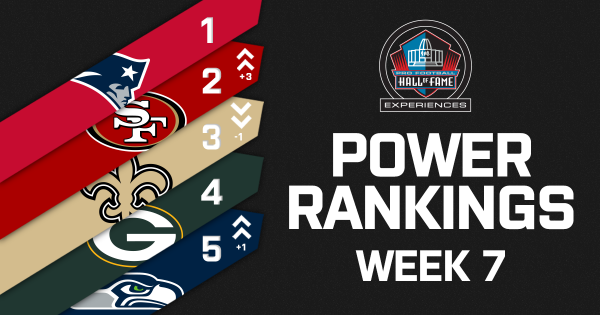 The injuries to New England’s offensive line are starting to catch up to them. While the Patriots sit atop the AFC with an undefeated record, it’s become apparent that the absence of center David Andrews and left tackle Isaiah Wynn have had a huge impact on offensive production.

New England’s running game has been mostly stifled with Sony Michel unable to regain the form from his breakout rookie season. In their 35-14 win over the Giants on Thursday, the Patriots averaged a disappointing 3.4 yards per carry as a team.

But then there’s New England’s defense, which has been their saving grace throughout the first six games. The bandits in secondary were out again on Thursday night, picking off Giants quarterback Daniel Jones three times and halting any momentum the opposition was gaining.

The NFC has a new frontrunner. While many expected the Rams to be the top dog in the NFC West this season, the 49ers have emerged from the ashes to be a true force in the division, and conference, through the first third of the season.

The 49ers defense has looked immovable in recent weeks, but especially in their 20-7 victory over the Rams on Sunday. San Francisco held Los Angeles’ offense to a measly 157 yards, paralyzing their opponent after the Rams scored on the opening drive.

Jimmy Garoppolo’s 243 passing yards and rushing touchdown were enough to get the job done, but the 49ers offense will have to pick up the pace as they get further down the schedule. But the reality is that the San Francisco offense is currently doing what is asked of them in order to win, which can’t be faulted.

There isn’t a quarterback controversy in New Orleans, but the fact that the Saints are 4-0 with backup quarterback Teddy Bridgewater behind center is something worth applauding.

Bridgewater, however, hasn’t been lighting up opposing defenses, making the wait for Drew Brees’ return from thumb surgery feel longer by the week.

But, like most teams in these power rankings, defense wins the day. The Saints throttled the Jaguars offense on Saturday in their 13-6 victory in Jacksonville. New Orleans held Jags rookie quarterback Gardner Minshew II without a touchdown pass for the first time in his career and only allowed 226 yards of offense.

The Packers defeated the Lions, 23-22, on Monday night to jump to the top of the NFC North, but it wasn’t pretty.

Green Bay benefited from two highly questionable “illegal hands to the face” calls on Lions defensive end Trey Flowers that resulted in a total of 10 points, including the game-winning field goal as time expired.

While the win will be the topic of discussion for most of this week, the Packers still did what needed to be done to jump to a one game advantage in the division. Aaron Rodgers is looking like his old self under new head coach Matt LaFleur and the backfield tandem of Jamaal Williams and Aaron Jones is tearing up opposing defenses.

Russell Wilson is back to looking like the best quarterback in the league.

Wilson threw for two touchdowns and rushed for one in the Seahawks 32-28 victory over the Browns on Sunday. But Seattle’s defense also forced four turnovers that helped them come back from an early 20-6 deficit to leave enemy territory with a win.

The victory pushes Seattle into the Power Rankings for the first time this season, but it likely won’t be the last. While other potential contenders in the NFC are struggling to maintain their footing (Dallas, Philadelphia and Los Angeles), the Seahawks have looked like one of the most consistent teams in the league through six games, mostly thanks to Wilson and a stout defensive unit.

And the scary part is that they might be getting better.

Jarran Reed, who accounted for 10.5 sacks last season, returns for their Week 7 meeting with Baltimore after serving a six-game suspension to start the year.

We are officially one third of the way through the 2019-20 season, but there’s still a long way to go until the 2020 Super Bowl. Want to be at Hard Rock Stadium when the AFC and NFC Champions face off? Secure a 2020 Super Bowl Ticket Package from HOF Experiences and get a game ticket, access to Gold Jacket Club hospitality, the Gold Jacket Autograph Session and much more.