Pro Football and the American Spirit 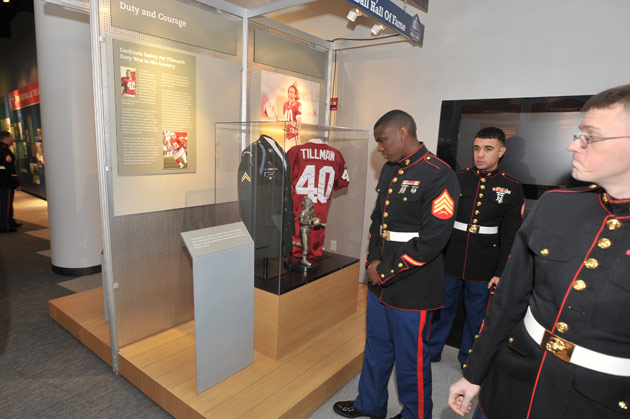 Pro Football and the American Spirit: the NFL and the U.S. Armed Forces chronicles the many ways in which the National Football League and its players have responded to America's call during military conflicts.

This inspirational exhibit recalls the stories of triumphs tragedy, and personal sacrifice made by the more than 1,200 players, coaches and administrators who interrupted or delayed their pro football careers to serve their country during times of military conflict.

Pro Football and the American Spirit also tells the story of how the NFL generated millions of dollars in War Bond sales during World War II, was the first sports organization to send groups of players to Vietnam as part of the NFL/USO "goodwill tours," and how it has used its game and resources to raise America's collective level of patriotism during and after such national crises as the Iranian hostage situation, the Gulf War, and following the September 11 terrorist attacks in New York City, Washington, D.C., and Pennsylvania.

Some of the items which highlight this exhibit include Pro Football Hall of Famer Art Donovan’s Army uniform; the career medals of General Earnest Cheatham, pro football highest ranking former player; the Cleveland Browns sideline jacket of Don Steinbrunner, one of only two NFL players to perish during the Vietnam War; and Pat Tillman's Army Ranger uniform.

Previous stops for the exhibit include the Hall at Patriots Place in Foxboro, Massachusetts; the Haggin Museum  in Stockton, Calif.; the Kansas Sports Hall of Fame located near Wichita, Kan.; the Green Bay Packers Hall of Fame; and the Gerald R. Ford Museum in Grand Rapids, Mich.