New York has a rich history when it comes to NFL Championship Games. Eight NFL championship games have been played in New York City. Several of those wintry contests are included among the more famous games in the history of the league.

None was more notable than the famous 1958 Championship Game played at Yankee Stadium. The Baltimore Colts defeated the New York Giants 23-17 in the first-ever overtime playoff game and the classic soon became known as “The Greatest Game Ever Played.”

Another interesting championship game in New York occurred in 1936. The Boston Redskins, disappointed by paltry ticket sales and waning fan support, moved their championship game against the Green Bay Packers to the Polo Grounds in New York. Hall of Fame team owner George Preston Marshall then permanently relocated his franchise to Washington, D.C. the following season.

One of the odder iconic games in league annals was the 1934 NFL Championship Game that is now referred to as “The Sneakers Game.” The Giants hosted the Chicago Bears in a rematch of the previous season’s title tilt. Although some folklore became legend about the specifics of what unfolded, the truth is that the use of borrowed basketball shoes played a major role in deciding the game’s winner. 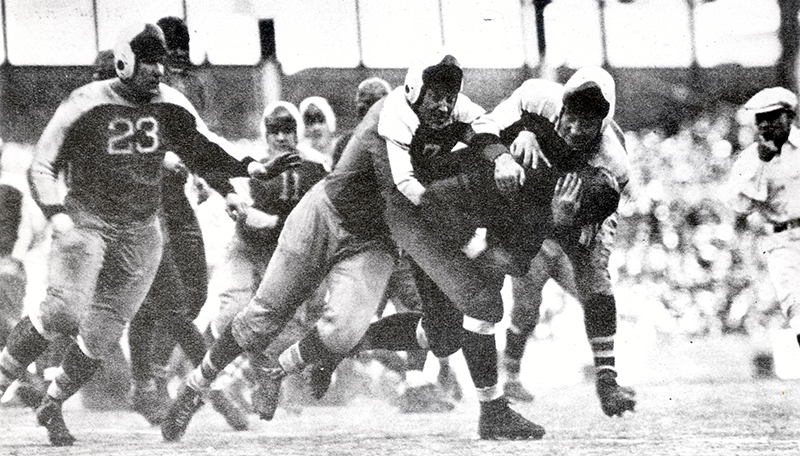 The heavily favored Bears entered the game at 13-0 and riding a lengthy winning streak that stretched back to the previous season. The Giants finished with a healthy 8-5 record but two of their losses came against the undefeated Bears.

A few hours before the game, the Giants team treasurer John Mara strolled across the Polo Grounds turf and observed a frozen, icy surface. He quickly alerted Head Coach Steve Owen and team captain Ray Flaherty about the field’s condition. Flaherty recounted a game at Gonzaga College in which he and his teammates swapped out their cleats for basketball shoes for better traction. A plan was put in motion. A locker room attendant by the name of Abe Cohen was sent on an errand to nearby Manhattan College to retrieve sneakers worn by the school’s basketball team.

Much of the lore centered on Cohen’s mission. The tale grew to indicate Cohen made the journey after kickoff and had to forcibly break his way through a door to get into the equipment room at the school before making a mad dash back to the stadium. Closer to the truth is that the Giants trainer Gus Mauch, who also worked at Manhattan College, had arranged the loan and Cohen had the sneakers ready and waiting in the Giants locker room if not by the start of the game, soon thereafter.

The teams struggled to gain footing on the slick field as the Bears built a 13-3 halftime lead. That is when Owen put their “secret weapon” into play. Since there weren’t enough pairs of shoes to outfit the entire team, Owen ordered sneakers to be used by his ends and backfield men.

The sneakers worked as expected. The Giants gained traction on the field and swiftly took command of the game against their disadvantaged opponents who tried their best to stop the Giants from ruining what could have been a perfect season.

New York, aided by four touchdowns in the fourth quarter, downed the Bears 30-13 to win the NFL title. Following the game, Cohen promptly returned the sneakers to Manhattan College so the basketball team could practice the next day.