Decade-by-Decade The 1980s and Flipper-s Record

Anderson "Flips" his way into the record books 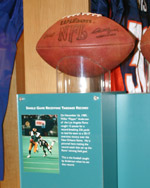 Coming into twelfth week of the 1989 season, second-year wide receiver Willie "Flipper" Anderson's greatest performance had been a 112-yard output eight weeks earlier. That was all about to change in a big way as Anderson recorded one of the greatest offensive displays in NFL history during the Los Angeles Rams' overtime win against the New Orleans Saints.

With their leading receiver Henry Ellard on the sidelines, the Rams were relying on Anderson to have a heavier presence on offense. He responded by shattering the NFL record for receiving yards in a game. During the afternoon, he caught 15 passes for 336 yards and one touchdown.

Not surprisingly, it was Anderson who put the exclamation point on his amazing afternoon when he hauled in quarterback Jim Everett's pass for a 26-yard gain in overtime. His catch set up the game-winning field goal by kicker Mike Lansford at 6:38 of the sudden death period to give the Rams a 20-17 victory.