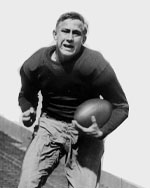 Jay Berwanger, B, University of Chicago

On May 19, 1935, the NFL club owners approved a plan devised by future Commissioner Bert Bell. The idea called for a draft whereby the weaker teams would have the first choice at top college prospects. The teams would draft in reverse order of their finish with the league champions from the previous season picking last.

The first NFL draft was held at the Ritz-Carlton Hotel in Philadelphia on Feb. 8, 1936. Since that time, there has been a college draft held every year resulting in a competitively balanced league.

The first-ever Heisman Trophy winner, Jay Berwanger from the University of Chicago, was the first player ever taken in an NFL draft. The Eagles selected the halfback but traded his rights to the Bears. Considering pro football wasn't a very lucrative career in 1936, Berwanger never played in the NFL.