The 1952 Dallas Texans were a National Football League franchise born of failure. The team was actually a transplanted version of another faux pax, the New York Yanks. When Yanks owner Ted Collins decided that eight years of red ink was enough, he sold his ailing franchise back to the league. A few weeks later then-NFL commissioner Bert Bell surprised the sports world when he announced that the franchise had been sold to a group of Dallas investors headed by Giles Miller, a young Texas millionaire. 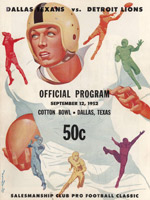 While some questioned the league’s decision to place a pro team in Dallas, an area that was devoted to the college game, others questioned Miller’s sanity in attempting to do so with the likes of the Yanks. More generous critics called Miller’s move "courageous."

Whether courageous or crazy, Miller was absolutely confident. "There is room enough in Texas for all kinds of football," he prophetically announced. Unfortunately, the only place in Dallas to prove that there was "room enough" for pro football, was the 75,000 seat Cotton Bowl. In their brief stay in Dallas, the largest crowd the Texans managed to draw was 17,499 curious spectators on opening day.

The Texans’ inaugural game actually began on an optimistic note - they scored first. Just minutes into the game the Texans recovered a punt fumbled by a Giants defensive back. Two plays later the Texans scored. Sequence photos of the scoring pass-play show that the nearest Giants defender was the same defensive back who had set up the drive with his fumble - Tom Landry. The Texans missed the extra point (something they would do six more times during the season) and the Giants went on to win 24-6. 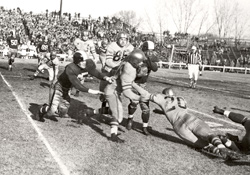 From there things got worse. The team continued to lose and crowds got smaller with each week. With five games remaining and the Texans unable to meet their payroll, Miller was forced to return the Dallas franchise to the league that operated the team for the remainder of the season.

The last three games were against the Detroit Lions, Philadelphia Eagles, and the Chicago Bears. It was decided that the Lions and Eagles would serve as hosts to the Texans, while the Bears would meet the vagabond team in Akron, Ohio.

The Akron game was actually the second half of a football Thanksgiving double header with a high school morning game outdrawing the pros. There were so few fans in the stands that in his pre-game remarks Texans coach Jimmy Phelan suggested that rather than introducing the players on the field, they should "go into the stands and shake hands with each fan."

Phelan had not lost his sense of humor and the team had not lost their will to win. The Texans stunned the Bears with a 27-23 victory. Following losses to the Eagles and Lions, the Texans folded.

Just why the Texans failed was a combination of bad management and bad luck. As Phelan put it, "We got all the breaks and they were all bad."