Here's the list of the 111 Hall of Famers (and the year of their induction) who have confirmed that they will be in Canton as part of NFL Homecoming this August. The list is as of July 9, 2003. 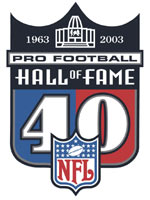