Hall of Fame guard Joe DeLamielleure was in Canton on Saturday to participate in the Hall's Best of Yesterday and Today autograph series. 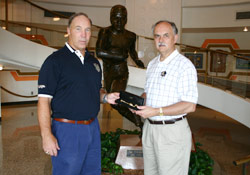 Before he sat down and signed autographs for the several hundred fans who lined up for the session, DeLamielleure presented the Hall with a unique memento.

DeLamielleure donated the gold bracelet that was given to him by Hall of Fame running back O.J. Simpson following the 1973 NFL season.

As a rookie that season, "Joe D" helped pave the way for Simpson who became pro football's first ever 2,000-yard rusher.  Simpson rushed for 2,003 yards as the Bills accumulated a then NFL record 3,088 yards on the ground.

Other Recent Donations to the Hall's Collection>>> 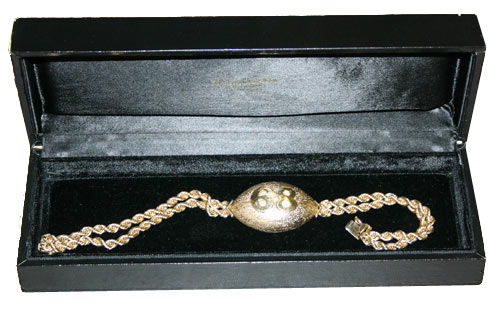 Best of Yesterday and Today finale

Barney speaks to group at HOF