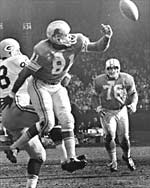 Pro Football Hall of Fame defensive back Dick "Night Train" Lane passed away Jan. 29, at the age of 73. Lane made an instant impact upon his arrival to the pro football scene in 1952. As an undrafted free agent, Lane set an NFL record with 14 interceptions during his rookie season with the Los Angeles Rams. That mark still stands in the NFL Record Book.

Lane, known for his spectacular plays, was also a fierce open-field tackler. After two seasons with the Rams, he was traded to the Chicago Cardinals where he played from 1954-1959. He moved on to the Detroit Lions in 1960 and starred with the Lions through the end of his career in 1965. Lane was elected to the Pro Football Hall of Fame in 1974.

Lane's funeral is Saturday, Feb. 2 at 11 a.m. CT. The service will be held at King-Tears Funeral Home located at 1300 East 12th Street in Austin, Texas.

Defensive end Howie Long was enshrined into the Pro Football Hall of Fame in 2000 after a stellar 13-season career with the Raiders.