Before the start of each National Football League season, it's not unusual, in fact it seems customary, for the local media to ask a veteran player to assess his team's young talent. So it was in 1984, when Gregg Bingham the Houston Oilers veteran linebacker was asked to comment on third-year guard Mike Munchak. "If Mike Munchak doesn't watch out," Bingham offered, "he might end up in the Hall of Fame. I wouldn't trade him for two John Hannahs."

Bingham's comments were in no way meant to disrespect New England Patriots lineman, Hannah, who was already considered by many to be the best guard of the era. Bingham's bold statement was made simply to emphasize just how convinced he was that his teammate was destined for pro football stardom, the kind that Hannah had already achieved. He was right.

While Bingham may have been the first to mention Munchak and the Hall of Fame in the same breath, he was by no means the last. In fact, on several occasions the team's offensive line coach referred to Munchak as "Canton." It was a reference that encouraged his teammates on the line to rib him mercilessly.

Although they kidded him, in more serious moments the other members of the offensive line echoed their coach's instinct concerning the big guard who wore number 63. "Five years after Munch retires, they're going to change the name of the road between Scranton (Munchak's hometown) and Canton to Highway 63," offered tackle Bruce Davis.

Munchak, who was born on March 5, 1960, in Scranton, PA, attended Central High School, where he lettered in basketball, track, and football. Recruited by Penn State as a defensive tackle, the high school All-America was converted to an offensive guard after his freshman year. Although he played on both sides of the line at Penn State, by his senior year he emerged as one of the top offensive linemen in the country and was named to several All-America teams.

"Mike has all the attributes and was probably one of the best linemen we've had here," said Dick Anderson, the Nittany Lions offensive line coach. "He has the blend of speed, balance, and talent that would allow him to play anywhere on the line."

The 6-3, 281-pound Munchak so impressed the Oilers that they tapped him with the eighth overall pick in the 1982 NFL Draft. The first lineman selected, he wasted no time proving himself worthy of the Oilers coaches' confidence by winning the starting left guard spot in his inaugural training camp.

Unfortunately, a broken ankle mid-way through the strike-shortened season sidelined the promising rookie. Determined to rejoin the team as quickly as possible, Munchak dedicated himself to a rigid rehab program and surprised everyone when he returned to the starting lineup for the final two games of the season.

Munchak remembers his first start as a pro. It was in a preseason game against the Dallas Cowboys. "I had to block Randy White," he said. "I thought, 'Wow, this is the guy I've been watching on television for so long, a guy who goes to the Pro Bowl every year.' I did pretty well against him for the first quarter, but then he started to play. I wasn't ready for what he had. He had such a great combination of strength and quickness. That was my indoctrination into the NFL. Thank God it was just an exhibition game."

Two years later, White faced a more mature Munchak. "I'm sure glad he's not in our division," White said after that encounter. "I would hate to think I'd have to play him every year. He's certainly going to be one of the very best." It was high praise coming from a future Hall of Fame player.

When Munchak learned that the Oilers had drafted him, one of the positives he cited was being able to play on the same team as Hall of Fame running back Earl Campbell.

"When I was picked by Houston, that was one of the first things that crossed my mind, he said. "Here I knew I had the chance to block for an Earl Campbell and help him out on the sweeps. That is a big incentive for any lineman. I wasn't with the Oilers during his 'Luv Ya Blue' heydays, but we played together for almost three years, and 1983 was a big year for him. It felt good just knowing that I had met him, blocked for him and was able to spend time with him."

It was Munchak's strong run blocking for Campbell in 1983 that first generated national critical acclaim for the young lineman. That year he earned second-team All-Pro honors and bold predictions of a promising future in the NFL.

However, in 1984 while his teammates prepared for the upcoming season on the practice field at Angelo State University (San Angelo, TX), "Munch" watched from the sidelines. Arthroscopic surgery to his left knee kept him from participating in the usual training camp routines. Team physicians optimistically speculated that if everything went his way, Munchak might be ready by the second week of the regular season. But, true to form, Mike had his own recovery schedule. He owned a streak of 17 consecutive starts and wanted to keep the streak alive. He also knew that his teammates were counting on him for the season opener against the defending Super Bowl champion Los Angeles Raiders.

Not only did Mike start in the opener, he started every game that year and enjoyed the kind of season the "experts" had predicted he would have. His outstanding play earned him the first of his nine Pro Bowl invitations and the first of seven All-AFC selections.

Munchak was the main cog in a very good Houston offensive line that was methodically built through the draft. He was the first of three offensive linemen selected by the Oilers in the first round over a three-year period. Center/guard Bruce Matthews was next, followed by guard/tackle Dean Steinkuhler.

"We were (former Houston Oilers general manager) Ladd Herzog's building blocks from those three drafts," remembered Munchak. "We were the line of the future." 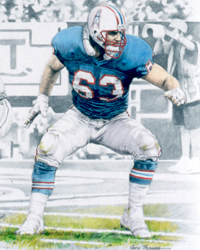 Not coincidently, the Oilers' on-the-field fortunes improved as Munchak's development and experience increased. The Oilers, from their dismal 1-8-0 record in the strike-shortened 1982 season, improved nearly every year that Mike played. Along the way, Houston advanced to the playoffs seven consecutive seasons (1987-1993) and captured the 1991 and 1993 AFC Central Division crowns.

The team's first playoff win, a 23-20 overtime victory against the Seattle Seahawks in 1987, is especially memorable for Munchak. "I remember winning the game in overtime and the place was sold out," he recalled in a 1993 interview. "I walked off the field with Bruce Matthews and Dean Steinkuhler and after five years, we felt we were finally on to something."

"During the season Munchak, Matthews, and Steinkuhler are like the Three Musketeers," wrote veteran Houston sportswriter John McClain. "They are inseparable. One for all, all for one."

With Munchak, who was voted to the NFL's Team of the Decade for the 1980's, as the lead Musketeer, the offensive line kept the Oilers at or near the top of the NFL's offensive statistical categories.

While most players are graded upon their individual play, offensive linemen are often graded in collective terms, and Munchak did little to discourage the tradition. He even seemed to encourage it by avoiding personal recognition.

"I don't want to say he is taken for granted, but it seems like more is written about me and Dean than Munch," Matthews told a reporter. "He really downplays any publicity. He'll shun the question all day if you ask him to say something good about himself."

Never the type of person who spoke just to make noise, Mike preferred to make his noise on the playing field, and more than one defensive lineman was familiar with the type of bell ringing that was his theme song.

"The thing that drives him is his competitiveness," Matthews explained. "He just can't stand to lose, and it doesn't matter what he's doing." Ten times the unassuming but driven lineman was named first- or second team All-Pro and nine times he was selected first- or second-team All-AFC.

While competitiveness drove Munchak, conditioning sustained him. He cited "working out in the off-season" as the key to his longevity.

Unfortunately, life in pro football's trenches takes a toll. Over his career Munchak endured nine knee surgeries, most on his left knee. He also had arthroscopic elbow surgery in 1989, suffered a neck strain at the end of the 1992 season, and throughout much of his career tolerated chronic shoulder injuries.

Still, the hard-playing lineman managed to play in 159 regular season games, which at the time of his retirement was the fourth longest streak in Oilers history.

"It happened so often that we came to think of him playing hurt as normal," said Matthews. But even hurt, Munchak was a clearly a cut above the rest. What he may have lost in mobility due to injury, he made up for with intelligent play.

"There's no doubt you lose something as you get older," the-then 10-year veteran told a reporter. "But, you learn to compensate with your experience.

"I still think I've got a lot of quickness, but I'm not as mobile as I used to be. I'm not going to be the guard pulling around the corner and leading the running back down the field. I can still get down there, but it's not as pretty as it was a few years ago," he concluded.

Even if his play wasn't quite as pretty, it was still just as effective, as evidenced by his selection as a first- or second-team All-Pro and/or All-AFC choice in his tenth, eleventh, and twelfth seasons of play.

However, prior to the start of the 1994 season, Mike, whose nine knee surgeries matched the number of times he was selected to play in the Pro Bowl, decided it was time to retire. At age 34, he initially thought he could squeeze out yet one more season, but eventually his knees convinced him otherwise. Immediately upon announcing his retirement, the Oilers retired his uniform number, and just as immediately, Munchak's name and the Hall of Fame were again linked.

Steinkuhler, for one, announced his plans to make the inevitable trip to Canton to pay homage to his line mate along with the other Musketeer, Bruce Matthews.

"I'll go up there and see him enshrined," Steinkuhler predicted, "and then I'll make sure to save us some barstools so the three of us can talk over old times."

Matthews was hoping for a little more. "If Munch makes the Hall of Fame, I want to be there when he's inducted," he proclaimed. "I'll be right there as a part of his entourage."

Seven years later, Munchak assured his old friend a spot in his "entourage" by selecting him as his Hall of Fame presenter. One for all and all for one.

Where would you rather be?