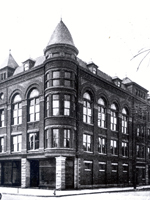 On September 17, 1920, a group of men gathered in Canton, Ohio at the Hupmobile showroom of Ralph Hay, owner of the hometown Bulldogs. The result of the meeting was the birth of the National Football League.

Photo (left): The meeting was held in the Hupmobile auto showroom of Canton Bulldogs owner Ralph Hay, which was located in the Odd Fellows Building (above). Though the building has been razed, the site is now identified with a historical marker.

First known as the American Professional Football Association (APFA) and later renamed the NFL in 1922, the league's first president was Jim Thorpe. Without a doubt the most famous athlete of his time, Thorpe helped add credibility to the sport. While not front-page news in 1920, the league's formation was the start of a journey that has made the NFL this country's favorite sport.

Pro football began in 1892 in Pittsburgh, Pennsylvania when former Yale star William "Pudge" Heffelfinger was paid a notable sum of $500 to play in a single game for the Allegheny Athletic Association on November 12. For nearly the next three decades, pro football faced its ups and downs as the game was played primarily in small towns throughout western Pennsylvania and the Midwest.

The first matter of business was Massillon's withdrawal from professional football for the 1920 season. The team never joined the NFL. However, by season's start, the membership also included the Buffalo All-Americans, Chicago Tigers, Columbus Panhandles, and Detroit Heralds. Only two of the franchises still exist today. The Decatur Staleys moved to Chicago in 1921 and were renamed the Bears one year later. The Chicago Cardinals franchise now calls Arizona home.

On September 26, 1920, the first game featuring a team from the APFA was played at Douglas Park in Rock Island, Illinois. The Independents were victorious as they rolled to a 48-0 win over the St. Paul Ideals. One week later, two league teams battled head-to-head for the fist time. The Dayton Triangles shutout the Columbus Panhandles, 14-0 in Triangle Park.

The Akron Pros, with an 8-0-3 regular season record, were crowned the league's first champion. 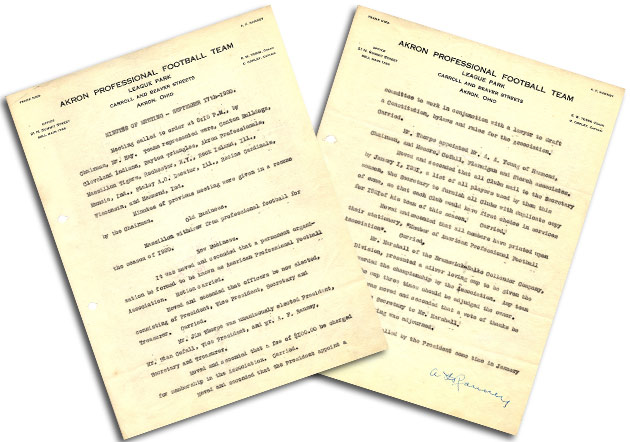 The minutes from the NFL's formation meeting are among the most precious documents
in the Pro Football Hall of Fame's collection.

The Cards' dream season in '47

The Cardinals of the late '40s featured an exciting offensive unit that led the team to its last NFL title.

A statistician's error almost cost the Dolphins a place in history.