In January 1960, a dozen National Football league team owners cast 23 ballots over a nine-day span in a futile attempt to find a successor for Bert Bell, the league's popular and competent commissioner, who had died three months earlier. 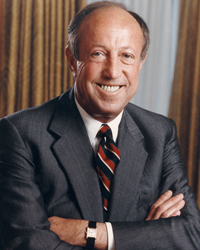 Early in the marathon meeting, Austin Gunsel, the NFL's treasurer and Marshall Leahy, the league's chief legal counsel, each had strong but almost-equal support. Numerous attempts to settle on experienced, well-known compromise nominees came to naught.

Finally, two powerful and respected administrators – Wellington Mara of the New York Giants and Paul Brown  of the Cleveland Browns, hit on the idea of Pete Rozelle, the 33-year-old general manager of the Los Angeles Rams, as a candidate most owners might accept. Rozelle was informed of their decision and then asked to leave the room so his name could be presented and discussed.

Rozelle was such an unlikely candidate that the press corps covering the sessions paid little attention as he ventured into the men's room, where he remained, pretending to be washing his hands, whenever anyone entered. After a couple of hours, Pete was invited back to the meeting to hear the news he was the NFL's new commissioner.

The stunning development was as much a surprise to Rozelle as it had been to everyone at the scene. Pete expressed his doubts as to whether he was the man for the job. "You'll grow into the job," Brown assured Rozelle. "Don't worry about it."

The choice of Rozelle as the NFL's No. 1 man proved to be perhaps the single most important decision ever made in the league's history.  Pete not only "grew into the job,” as Brown had predicted, but, within a relatively few years, was widely recognized as the premier commissioner of all professional sports.

The Pro Football Hall of Fame's Board of Selectors, made up of media representatives from every city in the NFL, elected Rozelle to membership in the Hall as part of the Class of 1985 that also included Frank Gatski, Joe Namath, O.J. Simpson, and Roger Staubach . Appropriately, Rozelle's first official appearance as a Hall of Famer came at a press conference in Honolulu on January 26, 1985, just 25 years to the day after he was elected commissioner. He was formally enshrined into the Hall of Fame on August 3 of that year.

No one knew what to expect from the new commissioner when he first reported to the NFL office in Bala-Cynwyd, PA, a Philadelphia suburb. Up until the day he became commissioner, Rozelle's pro football career had been limited to a three-year stint as the Rams' public relations director and a three-year tenure as the Rams' general manager. His most remembered accomplishment no doubt was his daring trade with the Chicago Cardinals in 1959 that brought superstar running back Ollie Matson  to Los Angeles in exchange for nine players.

"I may have been picked because I was the only one who hadn't alienated most of the people at the meeting," Rozelle ventured.

Most veteran observers could not imagine someone as amiable as Rozelle successfully handling the horde of strong-willed owners for whom he would have to work. But by employing the polite and patient negotiating and arbitrating style he exhibited throughout his tenure, Pete slowly but surely brought the owners into line. They also learned to like him as a friend.

After moving the NFL office to the nation's media center in New York in 1960, his first major chore was to convince the owners of teams in large metropolitan centers of the long-range benefits of sharing television revenue with the teams from the smaller market areas. Pete successfully lobbied in Washington for a limited anti-trust exemption to allow the NFL to negotiate a network television contract as a single enterprise. President John F. Kennedy signed a sports legislation bill into law on September 30, 1961. Three months later, Rozelle , announced a contract had been signed with CBS that produced the then-princely sum of $4,650,000 a year to be divided equally among the NFL's teams. Not only did the deal with CBS improve the NFL's financial outlook but it also became a valuable tool in fueling already growing fan enthusiasm.

Just a year later, after carefully investigating a series of allegations about gambling on NFL games by certain players, Rozelle acted decisively in suspending both Paul Hornung  of the Green Bay Packers and Alex Karras of the Detroit Lions. Although the suspensions were lifted after the 1963 season, the commissioner, with his strong and speedy resolution of a critical situation, assured the integrity of pro football in the public's mind. That profound image of stability and integrity continues today.

The AFL-NFL inter-league struggle of the 1960s commanded not only extensive media coverage but much of Rozelle's attention as well. With the competitive gap becoming greater in both leagues and with several clubs on the brink of possible collapse, it became apparent that an end to the "war" was essential for both leagues. After Rozelle and owners from both sides negotiated and finally announced a merger on June 8, 1966, Pete went to Washington to get congressional approval. On October 21, 1966, President Lyndon B. Johnson signed legislation granting a limited exemption that protected the June merger from anti-trust challenge.

As commissioner of both leagues, Rozelle began administering the terms of the merger with the same zeal he had exhibited earlier as the general of the NFL's player acquisition battle against the AFL. He recognized that harmony among the many entities of the enlarged league was essential. He carefully made sure the terms of the merger were fulfilled.

With tireless, persuasive resolve, he held all 26 owners in a 36-hour marathon meeting in 1969 until an agreement was reached to form two 13-team conferences. To achieve this goal, Rozelle had to convince the Baltimore Colts, Cleveland Browns, and Pittsburgh Steelers to transfer from the National into the American Conference. Each received $3 million in compensation to make the move to the less-publicized AFC.

A year later when the 13 NFC teams could not agree on their divisional alignment, Rozelle settle the issue by writing several plans on separate pieces of paper and then having a secretary pick one out of a hat. Another product of the merger was the Super Bowl.

In the years that followed, Pete and his capable staff carefully developed and promoted the game to its current leve1 as a premier American sports classic.

The NFL constitution grants its commissioner far-reaching responsibilities and Rozelle, during his entire years in office, had been the ultimate decision-maker on every matter that his office should legitimately handle. His span of responsibilities ranged from the promotion of the sport and the betterment of the game on the field to the preservation and protection of pro football from off-the-field hazards. Rozelle has been especially enthusiastic in his creation and support of the NFL's widely-recognized programs of community involvement through such projects as the United Way television campaign and numerous grants to charitable organizations that have been awarded by NFL Charities, which he founded in 1974.

In the decade prior to his election to the Hall, many dangerous, often unprecedented difficulties had emerged. Included were such problems as player strikes and threats of strikes, numerous court cases challenging the organizational structure of the NFL, continuing anti-trust legislation and congressional intervention that, as an example, took the form of anti-blackout legis1ation in the 1975. Through it all, Rozelle's firm leadership remained a dominating factor.

A capsule comparison of the NFL in 1985 when he was enshrined into the Hall of Fame compared to the 25 years prior when he was tapped commissioner of the league provides a quick insight into the progress experienced during Rozelle's stewardship that continued through his retirement in 1989.  In 1960, there were 13 NFL teams and 500 pro football players. In 1985, 28 teams employed more than 1,500 players. NFL attendance averaged 40,106 per game in 1960 compared to the 59,811 average for 224 regular-season games in 1984.  In 1961, the winning player's share from the NFL title game was $5,116. Each member of the San Francisco's Super Bowl XIX championship team received $64,000 in playoff winnings. The NFL per-team share of TV receipts has grown from $330,000 in 1962 to an estimated $14 million annually under the terms of the contracts that ran through the 1986 season. The list of comparisons could go on and on.

Pete was born in South Gate, CA, on March 1, 1926, and, like everyone else who grew up in the depression years, he had to work hard for what little money he earned as a youth. Money – or the lack of – in his early years left a lasting impression. Often times, he prefaced the descriptions of his early jobs with the money he made.

While he never played football, he did play tennis and basketball in high school and he developed a permanent interest in sports of all kinds. After serving as a Yeoman Second Class in the Navy during World War II, Pete entered Compton Junior College in 1946, where he earned $50 a month as the school's sports information director and as a "stringer" for the Long Beach Press Telegram. He also received an extra 50 cents for every Compton sports score he phoned in to the Los Angeles papers. In addition, he edited the Los Angeles Rams' game programs that year.

In 1948, he transferred to the University of San Francisco. Even though he was still a student, he earned $200 a month as the school's sports publicity director and assistant athletic director under Joe Kuharich.

At this stage of his life, Rozelle's career goals were not pretentious. He envisioned getting a degree in English and then working with the Los Angeles Times as that paper's sports editor.
Rozelle's modest goals were permanently sidetracked in 1952, when Tex Schramm, who at that time was the chief assistant to Los Angeles Rams' president Dan Reeves , offered Pete the team's public relations position. Pete asked for a $6,000 salary but settled for $5,500.

Three years later, Rozelle left the Rams to join an international public relations firm that had been retained to promote and publicize the 1956 Summer Olympics in Australia. But by 1957, Pete was back with the Rams as general manager and this time for a $25,000 salary.

He held that job until the fateful NFL meeting in January, 1960.

Rozelle himself agreed that he was fortunate that circumstances often seemed to place him in just the right spot when career-advancement opportunities for which he was qualified arose. A perfect example is the situation at the 1960 NFL meetings that led to his appointment as commissioner.

"For me, timing was just good," he reflected.

The Bears are one of two charter members of the NFL that still exist today.