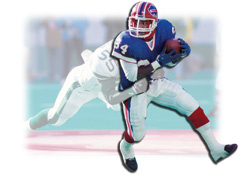 Played in front of fellow Hall of Famer Barry Sanders at Oklahoma State.

Only player in NFL history to lead the league in total yards from scrimmage four straight seasons.

Named NFL’s Most Valuable Player in 1991 after rushing for 1,407 yards and recording career-high 62 catches for an additional 631 yards.  Became the 11th player in league history to amass 2,000 all-purpose yards.

Thurman’s longest run and longest reception of his career both came against New England.

He raced 80 yards, with the help of a block from fellow HOFer James Lofton, on the first play of a drive early in the fourth quarter of the Bills’ 14-0 shutout against the Patriots on Nov. 18, 1990.

On Oct. 1, 1989, Jim Kelly found Thurman all alone and the duo hooked up for 74-yard pass play early in the 4th quarter of the Bills’ 31-10 win over their division rival. 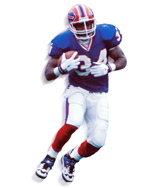 "Thurman wasn't the guy in the locker room who would stand up and say a lot, but when he got on the football field that's when his leadership came out.  Things he would say to offensive linemen on the sidelines and things he would say in the huddle. He'd say things on the field that would keep us going. Behind the scenes the attitude he brought to the game once he was on the football field was something not many people had a chance to see." – Hall of Famer Jim Kelly

"He was a great receiver out of the backfield.  He was Marshall Faulk before Marshall Faulk. He was the prototype of today's NFL running back and he started playing in the late 80's. He was a guy that was ahead of his time." – Steve Tasker, former teammate and current CBS football analyst