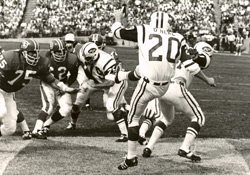 There are few marks in the National Football League’s record book that seem to be unbreakable.  However, the record for longest punt appears to be one such record that may never be broken.

With the help of some good bounces and a nice wind, Steve O’Neal of the New York Jets set the record when he unleashed a 98-yard punt against the Denver Broncos on September 21, 1969.

Later in the second quarter, the Jets line of scrimmage was at their own one-yard line so O’Neal, a rookie from Texas A&M, took the snap backed up against the end line (see photo right). His kick traveled about 75 yards through the air, sailed over the head of the Broncos’ Bill Thompson, and landed near Denver’s 30-yard line. The ball quickly bounced toward the other goal line and stopped at the one-yard-line where Thompson snagged it and ran just one yard before being tackled by New York’s Wayne Stewart.

Although official records were not kept, it is widely believed that Hall of Famer Wilbur “Pete” Henry booted a punt 94 yards as a member of the Canton Bulldogs in 1923.

The jersey and football used by Nathan Vasher on his record 108-yard touchdown return during Week 10 is now on exhibit at the Hall of Fame.

Browns Backers Day at the HOF

The Pro Football Hall of Fame is offering free admission and other great deals on Saturday (Dec. 3) for all Browns Backers.