Gerald Ford was an All-America center for the University of Michigan.  Although he was offered a chance to play in the National Football League by both the Green Bay Packers and Detroit Lions, he opted to attend law school at Yale, where he also spent time as the university's assistant football coach.

Here is a transcript of his speech from the Hall of Fame's front steps in 1974.

Thank you very very much, Pete (NFL Commissioner Pete Rozelle). Night Train Lane, Lou Groza, Bill George, Tony Canadeo on this occasion I feel very, very humble and very, very envious. I am humble because all four of these and those who have preceded them in the Hall of Fame are the typical examples of excellence in a sport that I participated in, but never achieved. They are the finest in professional football over the history of professional football. And, I'm humbled because they achieved that excellence and I and literally thousand of others sought, but never made it, respect them for their accomplishment. 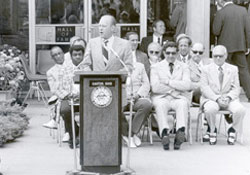 I must say that I'm envious because they have also achieved and accomplished the success that I for one sought in high school and college and subsequently in coaching, a recognition that I say in all sincerity probably deep down in my own heart, I would have rather achieved than the office of that I now hold.

But, they, because of their competent drive, their desire, have made this great Hall of Fame along with some 70 or 80 others. In my recent years of politics, I have taken a little kidding about having some association with football. So far back, it was back when the ball was round. But, nevertheless, this kidding has made me realize and appreciate something.

In the political arena I had many adversaries, few - if any enemies. In competition on the gridiron, I think I had many adversaries, but no enemies. One of my adversaries but not an enemy was a former President of the United States - Lyndon B. Johnson. We were pretty controversial adversaries for a period of time and Lyndon, on more than one occasion, in speaking of myself would say that there was nothing wrong with Jerry Ford except that he played football too long without a helmet.   Well, I don't comment on whether or not I wore a helmet at Michigan or not, but I was honored to play. And, I was honored to play because to me football really means something to me and literally thousands and thousands and thousands of others. It meant in the first instances, an opportunity to be associated with probably the finest group of men whether it was high school or college or in the period of coaching that I have ever had the opportunity to associate with. It gave me an opportunity to learn some of the basic lessons that you have to learn. And, perhaps learn them with some disappointments and some accomplishments. But, you learn them in cooperation with others. It gave me an opportunity as a player or as a coach a chance to get the benefit of the friends, advice of the grandstand and Monday morning quarterbacks.  Because it has meant sometime over a period of high school and college and a few years as a coach while I was going to law school.

And let me say all of us, you who are here, but particularly “Night Train” and Lou and Bill and Tony, football is something special in America. It is special because the players are typical Americans. They come from all segments of our society – rich, poor, north, south, east, or west. It is a melioration of the finest that I have ever seen in our total society.

The management is typical, I think, of the American management – good people who believe in the free enterprise system. They have made an investment to give to the fans the same excellence that the players have given. And, of course, athletics and particularly football is typical American.  America's strength comes from the people and the fans, literally millions around the 50 states are representative of America's very finest and America's very best.

Let me conclude with this observation. The typical American whether he is a player or owner or a fan that is really the strength of a great country. I happen to believe that our country with its typical America is probably the finest country in the history of mankind. Admittedly, we are not perfect. We have had problems in the past and we'll have them in the future. But as we look at cross-section America and as we look at what has been accomplished and achieved by those who came before us, we should be in this day and age stimulated to do in the future what our forefathers have done in the past. They built a great America. They have turned it over to us to manage and improve. To make certain that those that follow us have greater blessings, greater opportunity and therefore we, as we speak of pride for America and our pride in being Americans we double our efforts for those who follow. Thank you very kindly.

Take a look at statistical comparisons of many of the NFL's career leaders.

Michael Vick became the first quarterback in NFL history to rush for 1,000 yards when he eclipsed the plateau against the Panthers on Sunday.