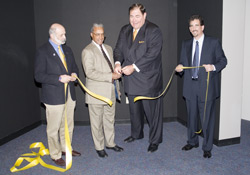 Officials from the Arena Football League appeared at the Pro Football Hall of Fame on Monday to scout the location of the new exhibit which will open soon (see story below).

AFL Commissioner David Baker was joined by Steve Perry, the Hall’s president/executive director for a ribbon cutting ceremony at the space that will house the exhibit on the AFL.  Installation for the exhibit begins next week.

Photo: AFL Commissioner David Baker (second from right) is joined by HOF President/Executive Director Steve Perry to cut the ribbon for the new exhibit at the Hall of Fame.  Joining them are Jerry Kurz, President of AFL2, VP of International for the AFL and one of three "founders" of the league (left), and Columbus Destroyers owner Jim Renacci (far right).

Feb. 15, 2007 - The Pro Football Hall of Fame will be unveiling its first-ever exhibit dedicated to chronicling the past, present and future of the Arena Football League on February 26. The AFL, which kicks off its 21st season on March 1 with 19 teams, is the nation's fastest growing sports league.

Since 2002, the AFL's total viewership has increased from 12 million viewers to 65 million, its team values from $12 to $20 million and its average per game attendance from 9,957 to 12,378. When combined with arenafootball2, the AFL's minor league, Arena Football will be played in 49 markets in 2007.

"There are many milestones for a growing sports league but I can't think of one that is more meaningful for our league than an exhibit in the Pro Football Hall of Fame," said AFL Commissioner David Baker, who will participate in a groundbreaking ceremony at the Hall on Monday, February 19 with Perry.

The exhibit itself will feature both AFL historical and interactive elements that are designed to illustrate the league's fast-paced action. A large photomural of an AFL field will serve as the backdrop to a display that will feature a large video screen - which will play a continuous two-minute highlight loop - a display panel and two interactive touch screens that will host a variety of videos designed to communicate the league's past, present and future. The display will be built on real AFL turf and guests will be able to examine an official AFL football, jersey and helmet.

About Arena Football League
Often recognized as one of the nation's most affordable and fan-friendly sports leagues, the Arena Football League begins its 21st season in March with 19 teams as it enters a five-year media partnership with ESPN. On the strength of its Mission Statement and Fans' Bill of Rights, the AFL is the second-longest running football league in U.S. history.

Class of 2007 inductee Charlie Sanders was the premier tight end of his era. He caught an astonishing 336 passes during a time when tight ends did more blocking than catching footballs.

A group of high school students who've been video conferencing with an Ohio high school made a visit to the Hall on Feb. 15th.