Tributes to the man whose name is now attached to the Pro Football Hall of Fame’s newest gallery were flowing this morning. An official ribbon-cutting ceremony took place  for The Lamar Hunt Super Bowl Gallery with remarks coming from NFL Commissioner Roger Goodell, Hall of Fame officials, as well as Kansas City Chiefs Chairman Clark Hunt. The final person to step to the podium was Lamar’s widow Norma Hunt who has attended all 43 Super Bowls. 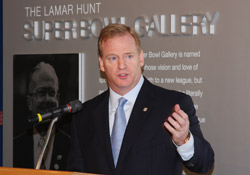 Among the dignitaries in attendance for the ribbon-cutting included Super Bowl Most Valuable Players Bart Starr, Len Dawson, and Troy Aikman. Other Hall of Famers in attendance were Chiefs legends Bobby Bell, Jan Stenerud, Emmitt Thomas, and Willie Lanier. Also seated in the VIP area for the ceremony along with other members of the Hunt family was Tennessee Titans owner Bud Adams. He, along with Lamar Hunt and Ralph Wilson, Jr., were among the founding owners in the AFL. Wilson will be officially enshrined into the Pro Football Hall of Fame later today as a member of the Class of 2009. 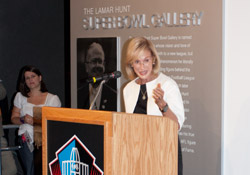 The museum’s newest gallery, a $2.4 million renovation and modernization project,  is named in honor of Hunt whose vision and love of sports not only gave birth to a new league, but an international sports phenomenon he literally named.

“There is no honor on Earth that Lamar would rather have,” shared Norma about the gallery bearing her late husband’s name “because he loved the Super Bowl and he loved the Hall of Fame both so much.”

Hunt, who was enshrined into the Pro Football Hall of Fame in 1972, was the guiding figure behind the formation of both the American Football League and the Dallas Texans franchise, which later became the Kansas City Chiefs. He is also credited with naming the Super Bowl.

Within the Lamar Hunt Super Bowl Gallery dynamic displays and exciting interactive video kiosks highlighting every Super Bowl, the great plays and the game’s stars, complements the one-of-a-kind game artifacts that permeates throughout the 4,000-square-foot space. Stories like how the merger of the AFL and NFL resulted in the creation of sport’s ultimate championship game; the significance of the first four Super Bowls; and how the game has risen to unsurpassed levels of popularity worldwide is now presented in grand fashion.

In a state-of-the-art Super Bowl Theater, visitors will experience the sense of awe and excitement that is the Super Bowl as the full force of the most recent game is presented through the cinematic magic of NFL Films. 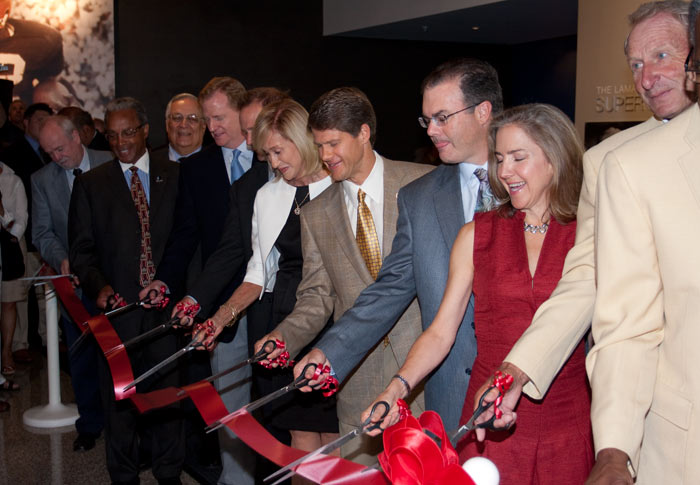