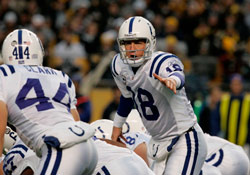 The Indianapolis Colts, with a 14-2 record during the 2009 NFL Season, galloped past the New England Patriots to earn the distinction of being the winningest team in the decade of the 2000s. Their 115 regular season wins were three better than the Patriots who stand in second place with 112. Rounding out the top five teams of the decade, the Philadelphia Eagles and Pittsburgh Steelers tied each other for third with 103 wins while the Green Bay Packers finished fifth with 95 victories.

Heading into to the final season of the 2000s decade, the New England Patriots, with 102-42 overall record and a .708 win percentage, held the National Football League’s best record from 2000-08.  That was not enough, however, to hold off the Colts who started the season only one game behind them with a 101-43 mark (.701 winning percentage).

Best Records by Decade
Franchise had to play at least five seasons in decade to be considered. Tie games were not calculated in winning percentage prior to 1971.

Packers defensive end Vaughn Booker was featured on the cover the program of the game versus the Chicago Bears on Nov. 7, 1999.