New Orleans, Louisiana has been the site of ten of the 44 Super Bowls over the years.  What better place to celebrate the achievements of two team’s season-long struggle to the top than the “Big Easy?”  Warm weather cities like New Orleans, Miami and Los Angeles are logical sites for the National Football League to showcase the sports premier game.  Unfortunately, Mother Nature hasn’t always cooperated.

At a time when the Super Bowl was still in its infancy, the game made its second appearance at Tulane Stadium in New Orleans. The Dallas Cowboys battled the Miami Dolphins in Super Bowl VI as the Cowboys and Dolphins took the field on January 16, 1972 the city of New Orleans was anything but a sultry site on the water.  A cold front had moved in and at kickoff the temperature was a mere 39 degrees.  The conditions seemed to spell an almost certain defeat for the tropical team from Miami. The Dolphins offense sputtered in two late season losses in the cold weather cities of Boston and Baltimore in early December. 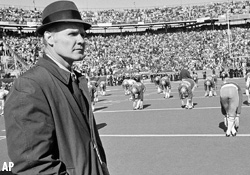 The Cowboys on the other hand came into the game with a nine-game win streak that included a 20-12 victory over the Minnesota Vikings at Metropolitan Stadium in Bloomington, Minnesota. The game conditions for that Divisional playoff game was a rainy 30 degrees.

The Dolphins offensive troubles started early in Super Bowl VI. On their second offensive series of the game fullback Larry Csonka fumbled for the first time that season. The miscue led to a Cowboys field goal.  In the second quarter Roger Staubach hooked up with Lance Alworth for a 7-yard touchdown and after a 31-yard Miami field goal, Dallas took a 10-3 lead into halftime.

Dallas received the second-half kickoff and took control of the game. Staubach leaned heavily on running back Duane Thomas as the Cowboys marched 71-yards in eight plays capped by Thomas’ 3-yard touchdown run, putting the Dolphins behind 17-3.

Miami never recovered and early in the fourth period Chuck Howley intercepted a Bob Griese pass at mid-field and returned it to the Miami 9.  Three plays later Roger Staubach cemented his MVP campaign with a 7-yard pass to tight end Mike Ditka for the game’s final score. The Cowboys won 24-3 to capture its first Super Bowl title.

Each Monday throughout the NFL regular season, we profile a different member of the Pro Football Hall of Fame. This week, we take a look at the rugged career of Class of 2001 enshrinee Jack Youngblood.