In times of crisis: The Patriots prevail

Six months after America was devastated by the attacks on the World Trade Center in New York City and the Pentagon in Washington D.C., September 11, 2001, the National Football League set the stage for one of the most entertaining and empowering Super Bowls of all time. Super Bowl XXXVI was a classic matchup of David and Goliath between the heavily favored St. Louis Rams, with their high powered offense, and the team oriented New England Patriots led by backup quarterback Tom Brady. 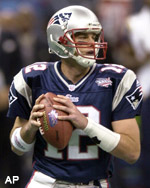 The Rams came into the game ranked number one in the NFL in total offense and number three in total defense. They clearly looked poised to capture their second Super Bowl title in three years. On the other hand, the Patriots had come off a 5-11 season in 2000, and started ‘01 with two losses before starting QB Drew Bledsoe went down with an injury. Brady then came in and led the Pats to an 11-5 record, two playoff victories and the franchise’s third Super Bowl appearance. New England was in search of its first Lombardi Trophy.

St. Louis kicker Jeff Wilkins started the scoring with a 50-yard field goal, that capped a 10-play, 48-yard drive midway through the first quarter and gave the Rams a 3-0 lead. The first turnover of the game came in the second quarter, when Ty Law stepped in front of a pass intended for Isaac Bruce and raced 47 yards down the sideline to put the Patriots ahead 7-3.

Late in the third quarter, the Rams turned the ball over for the third time when receiver Torry Holt slipped coming off the line of scrimmage, and New England corner Otis Smith intercepted Warner's pass. After a 30-yard return to the Rams' 33, Patriots’ kicker Adam Vinatieri kicked a 37-yard field goal. The Patriots led 17-3 with only one quarter to play.

The Rams may have been down, but they weren’t out, as the Rams’ offense, known as “The Greatest Show on Turf,” responded by putting together two fourth quarter scoring drives. The first capped by a Warner 2-yard quarterback sneak cut the deficit to 17-10. The second, a 26-yard touchdown pass to Proehl, tied the game with 1:30 remaining.

After a short Patriots’ kickoff return left them at their own 17-yard0line without any timeouts, New England played for the win, and Brady became a star. He ran the 2-minute offense to perfection and with a 16-yard completion to tight end Jermaine Wiggins that placed the Pats at the Rams' 30-yard line with seven seconds to play.

Vinatieri then drilled the 48-yard field-goal attempt, and marked the first time in Super Bowl history the game had been won on the final play.

Although the Rams outgained the Patriots 427-267 in total yards, the Patriots forced three turnovers, which resulted in 17 points and sealed St. Louis’s fate.

Brady earned Most Valuable Player honors for his clutch play, as he completed 16 of 27 passes for 145 yards and one touchdown, and led New England to their first Super Bowl victory.

The game proved to a great diversion for a nation that was in need of healing from the tragedy that occurred at the outset of the season. Perhaps as memorable as Tom Brady’s on-field heroics was an emotional halftime tribute by U2 to the victims of 9/11.

Ten years after his tragic death on Nov. 1, 1999, we reflect on the life and career of Hall of Fame running back Walter Payton.