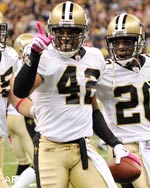 Darren Sharper, a free agent signee of the New Orleans Saints, entered his 13th NFL season this year as the leader in career interceptions among active players. He had recorded 54 picks during his time with the Green Bay Packers (1997-2004) and Minnesota Vikings (2005-08). His first two interceptions of his career were returned for touchdowns. Since that time he added six more touchdowns on interceptions to enter the 2009 season ranked fifth in NFL history in that category.

It didn’t take long for Sharper’s impact to be felt this year. Just four weeks into the 2009 campaign with his new club, he has already picked off five passes including a pair of interceptions in the Saints’ win over the New York Jets on Sunday. Two of his interceptions this season, a 97-yard return in Week 2 and his career-long 99 yarder versus the Jets, were returned for touchdowns. In doing so, he has become just the second player in history to record double-digit interception returns for scores. Only Hall of Famer Rod Woodson (12) has more interceptions returned for touchdowns.

Sharper’s two long interception returns this season also marks just the second time ever in NFL history that a player returned two interceptions for TDs of at least 90 yards in the same season. Deion Sanders accomplished the feat in 1994 as a member of the San Francisco 49ers. Sanders returned an interception for 93 yards at Atlanta on Oct. 16 that year and then scored on a 90-yard interception return against the San Diego Chargers on Dec. 11.

Arizona Cardinals quarterback Kurt Warner set two significant career milestones during his team’s win over the Houston Texans in Week 5. See how current NFL stars continue to move up the ranks of the all-time stat leaders in our Weekly Top 20.