This one’s for John!

One particular future Hall of Famer was very familiar with that fact. John Elway had led the Denver Broncos to three Super Bowl appearances during this period of dominance by the NFC. Each time Elway and the Broncos failed to hoist the Vince Lombardi Trophy.

During the 1997 season, Elway’s 15th year in the NFL and nine years after his last trip to a Super Bowl, he and the Broncos made a return appearance. Denver made the post season as a wild-card team and advanced through the AFC playoffs capped by a 24-21 win over the Pittsburgh Steelers to earn a trip to Super Bowl XXXII. Denver faced the defending Super Bowl champion Green Bay Packers in San Diego, the site of the Broncos loss to the Washington Redskins in Super Bowl XXII. 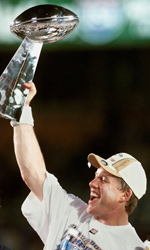 The Packers marched 76 yards in just over four minutes on the game’s opening series and took the lead when Brett Favre connected with Antonio Freeman on a 22-yard touchdown pass. Just like that it looked like the Broncos were once again in for disappointment.  But Denver responded on their opening possession with a 10-play, 58-yard drive capped by Terrell Davis’s 1-yard TD run to tie the game.

Two plays later strong safety Tyrone Braxton intercepted a Favre pass at the Green Bay 45-yard line. The Broncos moved quickly and took a 14-7 when Elway scored on a one-yard run early in the second quarter. Denver’s defense came up big again as free safety Steve Atwater forced a Favre fumble and defensive end Neil Smith recovered the ball at the Packers' 33. That drive ended with a Jason Elam 51-yard field goal to give the Broncos a 17-7 lead.

After an exchange of punts, the Packers chewed up 7:26 with a  17-play, 95-yard drive that ended with a Favre 6-yard touchdown pass to tight end Mark Chmura with 12 seconds left in the half.

The Packers tied the game in the second half as Ryan Longwell nailed a 27-yard field. The two teams again exchanged punts before Elway went to work. He keyed a 13-play, 92-yard drive punctuated by another 1-yard TD run by Davis with 34 seconds left in the third quarter.

Sparked by a Eugene Robinson interception in the end zone, the Packers drove the field in just four plays to score the game-tying touchdown on a 13-yard pass to Freeman with 13:32 remaining. Each defense stiffened, and the scoring slowed until Davis rushed in for his third one-yard touchdown of the game putting the Broncos up for good 31-24 with 1:45.

The Broncos and Elway finally hoisted the Lombardi Trophy, something they repeated a year later.  And in this one Elway didn’t have to carry the load. It was Davis, who rushed for 157 yards and scored a Super Bowl-record three touchdowns, named the game’s most valuable player.

But just as Broncos owner Pat Bowlen exclaimed happily upon being handed the Super Bowl Trophy, “this one’s for John!”

One member of the AFL's "Foolish Club" remains as an owner of his team today.

Road to Canton (via South Florida)

Now through Thanksgiving when the list of nominees is trimmed to 25, we’ll take a look at those players, coaches, and contributors that comprise the Class of 2010 candidates. This week our our focus is on the NINE QUARTERBACKS among this year's nominees.