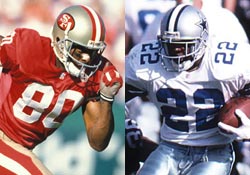 Other than the four first-year eligible nominees, each of the remaining 21 nominees on the Hall of Fame’s Selection Committee’s list of nominees has been a semifinalist at least once prior to this year. The list of 25 includes a coach, Don Coryell, and two contributors, Art Modell and Paul Tagliabue.

The complete list of 25 modern-era semifinalists is as follows:

The list of 25 semifinalists will be reduced by mail ballot to 15 modern-era candidates.  That list increases to 17 finalist nominees with the inclusion of the two recommended candidates of the Hall of Fame’s Seniors Committee.  The Seniors Committee nominees, who were announced in August, are Dick LeBeau and Floyd Little. LeBeau played 14 seasons (1959-1972) at cornerback for the Detroit Lions. Little, a running back played nine seasons (1967-1975) for the Denver Broncos.

The results of the modern-era reduction vote to 15 finalists will be announced on January 7, 2010.

To be considered for election to the Pro Football Hall of Fame, a nominated player or coach must have been retired at least five years.  A contributor, who is a nominee who has made outstanding contributions to pro football in capacities other than playing and coaching, may still be active in his pro football career.

Although there is no set number for any class of enshrinees, the Pro Football Hall of Fame’s current ground rules do stipulate that between four and seven new members will be selected each year. No more than five modern-era nominees can be elected in a given year and a class of six or seven enshrinees can only be achieved if one or both senior nominees are elected.

The Class of 2010 will be determined at the Selection Committee's annual meeting on Saturday, February 6, in South Florida the day before Super Bowl XLIV. The election results will be announced at 5 p.m. ET during a one-hour NFL Network special, live from the Super Bowl media headquarters.

Fans are encouraged to visit www.fanschoice.com daily to vote for their favorites before the next Pro Football Hall of Fame Selection Committee reduction vote to 15 modern-era finalists that will take place in January.

DETAILED LOOK AT SEMIFINALISTS FOR CLASS OF 2010

Selection process – how are enshrinees elected?

Semifinalists for the Class of 2010

What Do the Fans Think?