The Pro Football Hall of Fame instituted a volunteer program in 2007 to enhance the visitors experience while touring America’s premier sports museum. Today, when fans walk through the front doors of the Hall of Fame, they are instantly greeted by a volunteer. Sprinkled throughout the 83,000-square-foot facility are many other volunteers who are just a football throw away should a guest have a question. In addition, several docents throughout the day provide special presentations that feature artifacts from the Hall of Fame’s collection that are not on display. 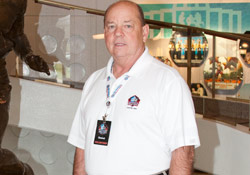 Recently, one of the Hall of Fame’s many volunteers hit a significant milestone. Dan Thatcher became the first volunteer to log 1,000 hours of work at the Pro Football Hall of Fame, but he would not be the one to tell you.

“Volunteering is the right thing to do. I got to 1,000 hours first because I have the most time to give,” downplayed the humble Thatcher.

“Our volunteer program has been a tremendous success based on the feedback that we receive from our guests,” stated Vice President Communications/Exhibits Joe Horrigan. “This is a true reflection on the great efforts put forth by individuals like Dan and the many other volunteers who lend their time to us.”

Thatcher, a retired principal for The Timken Company in Canton, appreciates the fact that he is involved in a volunteering job where everyone coming through the front door wants to have a good time. He values his position in helping people who are coming to enjoy an experience they have looked forward to for a long time.

One of Dan’s most rewarding and memorable moments as a volunteer came when a woman from New York arrived to tour the Pro Football Hall of Fame for her father. The woman’s father was terminally ill and could not come to Canton, but had always wanted to visit. So, with a camera in hand and her dad on the phone, the woman and Thatcher proceeded throughout the Hall, describing the many mementos that the man wanted to see.

Thatcher intends on continuing to volunteer at the Pro Football Hall of Fame “as long as he is able” and admits that there are still too many perks at the Hall to give up his “job” anytime soon.

“It’s a win-win-win situation. The staff wins because they have volunteers to help explain the unique history of pro football to the guests, the volunteers win because we get to learn fascinating things about the sport and meet so many special people,” said Thatcher, “and most importantly the guests win because there are people like us ready to aid their consumption of pro football’s history.”

With that mentality, it appears that Thatcher just may be on his way to become the museum’s first 2,000-hour volunteer.

Panthers and Jaguars debut in Hall of Fame game