Many football fans regard the 1958 NFL Championship Game as the first overtime game in National Football League history. That memorable showdown between the Baltimore Colts and New York Giants was indeed the first playoff overtime game.

Many years earlier, a clause about sudden death in a playoff game had been written into the NFL’s bylaws for such an instance. However, while never tested prior to the ’58 title bout, there was an experiment with sudden death in a preseason game three years before the the Colts-Giants clash. 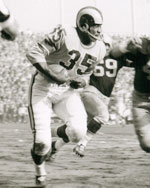 The Giants were set to face the Los Angeles Rams on Aug. 28, 1955 in a game to be played at Multnomah Stadium in Portland, Oregon. The game’s promoter, Harry Glickman, had sought and received permission from the NFL to use sudden death should the game end in a tie at the end of regulation. Glickman’s motivation for having the overtime rule in affect was more for a publicity stunt to sell tickets. (FROM THE HALL'S ARCHIVES. Program from Rams vs. Giants at Portland, Oregon, Aug. 28, 1955.  Cover  |  Letter from Promoter)

As fate would have it, the rule was put to a test that day. The Giants, who were led by quarterback Charley Conerly and Hall of Fame halfback Frank Gifford, took an early 10-0 first quarter lead. The Rams’ Tank Younger (photo left) narrowed the margin on a five-yard run in the second quarter as the  half ended with the Giants in front 10-7.

Los Angeles struck twice in third quarter and jumped ahead 17-10. The Giants’ Alex Webster scored on a three-yard TD run to knot the game in the middle of the fourth quarter and the score remained even at 17-17 when the final gun sounded.

Following a bit of confusion, referee Ross Bowen consulted with Rams owner Dan Reeves and New York’s General Manager Wellington Mara. It was agreed that the sudden death period would be played.

“I didn’t think there was a chance in a million it would be used,” Glickman was quoted as saying after the game.

The sudden-death period, however, did not last very long. The Rams won the coin toss and, guided by Hall of Fame quarterback Norm Van Brocklin, constructed an eight-play, 70-yard drive that culminated with a two-yard TD plunge by Younger. The winning tally came  just three minutes and 28 seconds into the extended play.

Despite the victory, Rams’ coach Sid Gillman wasn’t all that enamored with the overtime rule. A newspaper account the next day shared that Gillman’s opinion of the overtime rule was that it placed too much emphasis on the coin toss. He told a reporter that something needed to be implemented that gave both teams the opportunity to have the ball during sudden death.

A half-century later, the very same debate continues that may very well result in a change in the NFL’s bylaws.

As a side note, another innovation was incorporated during this game. The field yard lines were marked from zero to 100 instead of the traditional goal lines to the 50. Not surprisingly, this trend never caught on.

A letter from the game promoter for a 1955 preseason game between the Rams and Giants. It marked the first overtime game in NFL history.