It was no coincidence that Class of 2010 enshrinee Russ Grimm was coming into his own at the very same time that the Washington Redskins offensive line was beginning to garner attention around the football world. 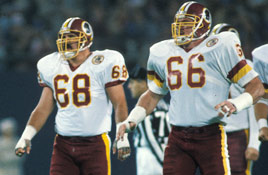 A front line made up of young players was labeled “The Hogs” and their reputation soon was reaching celebrity status. The reputation was far more than the fun name assistant coach Joe Bugel gave his o-line. Rather the group of skilled blockers began dominating defenses by opening holes for future Hall of Fame running back John Riggins.

One particular streak of games put “The Hogs” on the football map. Their performance in the 1982 postseason, one in which the Redskins won their first Super Bowl, was exactly what the NFL needed. The league was rebounding from a strike-shortened year and a special playoff format was devised to accommodate the nine-game regular season.

Washington finished 8-1 in the regular season and entered the 16-team playoff tournament with high hopes. Thanks much in part to Grimm as the leader of the “Hogs,” the Redskins made a memorable run to the championship.

Riggins had totaled 553 yards in the regular season. Then, he embarked on a playoff run for the ages that saw him gain 610 yards.  A good portion of his yardage came thanks to the blocking of Grimm and tackle Joe Jacoby (photo above) who perfected the team’s “counter-trey” running play. With Grimm opening holes, Riggins became the first runner in history to have four straight 100-yard rushing performances. It was all capped with Riggins' then-Super Bowl record 166 yards against the Miami Dolphins in Super Bowl XXII.

In all, the Redskins averaged an incredible 198 yards rushing that postseason with Riggins racking up 152.5 yards per game. The 792 total rushing yards by Washington remains the most every in a single postseason.

Opponents found themselves simply grinning and baring the Redskins onslaught!

Here’s a game-by-game breakdown of one the NFL’s greatest playoff runs in history.

When Rickey Jackson wasn't busy creating havoc for whoever had the ball, he managed to drop back in coverage and picked off eight passes in his career.

John Randle, the 14th undrafted free agent in the Hall of Fame, is the first player who played primarily as a defensive tackle to be elected to the Hall of Fame since Randy White in 1994.