A piece of history handed off

Buffalo Bills running back Fred Jackson made history last season and on Sunday he handed a piece of it to the Pro Football Hall of Fame.

Jackson presented Hall of Fame President/Executive Director Steve Perry and Vice President-Communications/Exhibits Joe Horrigan with a jersey he wore.  Jackson became the first player in National Football League history ever to rush for 1,000 yards and have 1,000 kickoff return yards in the same season. He made the presentation of his jersey to the Hall of Fame prior to the Kickoff Weekend game between the Bills and Miami Dolphins at Ralph Wilson Stadium yesterday.

“First of all I want to say thanks to all of my teammates because without them I wouldn’t have been able to do half the stuff I did out there,” Jackson commented. “This is a representation of them as well. This is my jersey and it’s a great honor for me to present it to you guys to display it for me.”

The Bills running back had a career season in 2009 as he led the league in combined net yards from scrimmage with 2,516 total yards. It was the fourth most prolific season of combined net yards ever. He rushed for 1,062 yards and added 1,014 on kickoff returns. Jackson eclipsed the 1,000-yard rushing plateau in the Bills’ season-ending win over the Indianapolis Colts.

“It’s an honor for us to do it (accept the jersey) and for the Pro Football Hall of Fame to display your jersey so that all the fans can come and see and reflect on the phenomenal record you set,” said Perry. 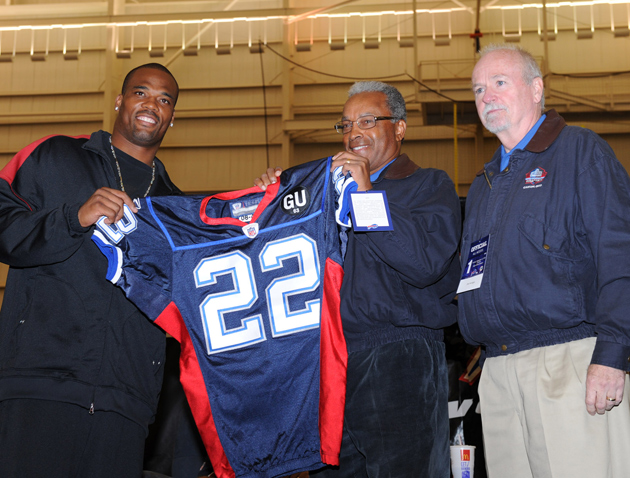 Bills RB Fred Jackson hands his jersey from his record-setting 2009 season to the Hall of Fame's
Steve Perry and Joe Horrigan.