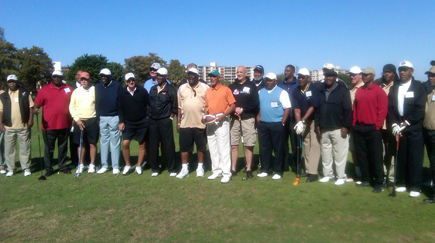 Hall of Famer Larry Little was busy in South Florida this past weekend as the host of The Larry Little Legends Golf Classic, now in its fourth year. The charity tournament, held at Inverrary Country Club in Lauderhill, Florida, raises money for The Virginia Key Beach Park Trust which focuses on maintaining the beach as a national historic site.

“Virginia Key Beach was a “Colored Only” beach when I was a child and the only place my family could go to enjoy the sun and sand,” explained Little who is passionate about his cause, one of many he is actively involved with in the Miami area.

The Hall of Fame staff was represented by President/Executive Director Steve Perry and Vice President Steve Strawbridge along with Hall of Fame Board of Trustees members Chairman Tom Schervish and Steve Schott.

Little will be on hand in Canton this coming weekend as part of the Pro Football Hall of Fame's autograph series. Details>>>

Ronde Barber of the Tampa Bay Buccaneers set a NFL first in Week 11. The jersey and gloves from the milestone moment are now part of the Hall of Fame's collection.