The Drafting of the 2012 Class – Chris Doleman

Improving at every level 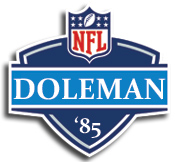 Chris Doleman’s rise to pro football immortality didn’t begin with a “blue chip” label. The talent was obvious, yes, but the 6’5”, 218-pound product out of William Penn High School in York, Pa. wasn’t finding recruiters knocking down his door during his senior year. Perhaps part of the issue was the coaching he was receiving, or more accurately, the lack of coaching.

Despite all of the ability and potential, Doleman’s high school teams struggled to find leadership and direction. It all began during his junior season when the teachers went on strike just before the school year. That left the football team without a coach. Forced to fend for themselves, the squad never quite recovered from their stunted development and struggled to find their way that season.

The following year, with the optimism of a fresh start, the team was once again left without guidance when their coach suffered a heart attack. As Doleman’s senior season came to a close his options seemed limited and he decided to sign with Temple University. Shortly thereafter, an unexpected suitor came calling that summer.

“I was never known as the high school All-America type,” Doleman remembered looking back on his playing days at York. “I only had one honor in high school that was all-state. But I played in the Big 33 game…Jackie Sherrill (University of Pittsburgh head football coach) saw me and said I was the best player out there. Pitt started recruiting me heavier after that game.” 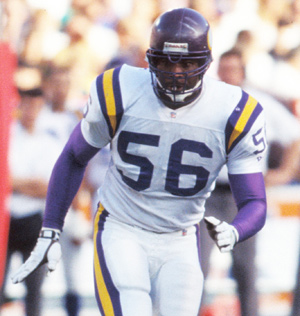 Sherrill was obviously impressed with Doleman’s potential and convinced both him and his parents to reconsider the offer from Temple. Chris opted to follow Sherrill’s suggestion and sat out one year and attended Valley Forge Military Academy. He was then eligible to join the Panthers for the 1981 season.

Doleman was making an impact by the third game of his freshman season at Pitt and had firmly entrenched himself as the starter at left defensive end. When the season ended he had compiled 45 tackles, two tackles for losses, four passes defensed, one fumble recovery and 12 quarterback sacks for the number one ranked defense in the nation.

When Doleman returned for his sophomore season Sherrill had left Pitt and Chris struggled to duplicate his freshman sack total. But by his senior season he had matured both physically and mentally and was garnering comparisons to another former Panther star and future Hall of Famer Rickey Jackson.

Although Pitt was ranked in the top five of the college football preseason polls, the team struggled against a very tough schedule and finished the season with a disappointing 3-7-1 record. Despite the poor team record, NFL scouts loved Doleman’s combination of size, athleticism, speed and strength. The only concern was which position he would play at the next level, defensive end or linebacker.

As the 1985 NFL Draft got under way many of the experts viewed the field as deep in talent but shallow on stars. The Buffalo Bills began by selecting Virginia Tech defensive end Bruce Smith number one overall. The Minnesota Vikings held the second selection and traded the pick to the Atlanta Falcons for the fourth overall selection and the Falcons’ third-round choice. Atlanta drafted Doleman’s Pitt teammate, offensive tackle Bill Fralic. The Houston Oilers then stayed close to home with the third pick by selecting Texas A&M defensive tackle Ray Childress. Most of the media was expecting the Vikings to pick Miami (FL) receiver Eddie Brown but the team opted for Doleman who they had pegged for a linebacker spot.

Doleman had an impressive rookie season with the Vikings. He played in all 16 games with 13 starts  at linebacker and finished third on the team with 113 total tackles, recovered three fumbles and intercepted one pass. He was recognized for his performance with a selection to the All-Rookie team by the Pro Football Writers Association.

The following season Doleman continued his growth and started six games at outside linebacker before he transitioned back to his natural defensive end position for the final last three games of the regular season. It was there where Doleman showed off his pass rush ability by recording two of his three sacks that season. Chris added 20 pounds to his frame in the offseason and came into the 1987 season as the starting defensive end. He responded with a team-high 11 sacks and six forced fumbles. Doleman was named All-Pro, All-NFC and voted to play in his first of eight Pro Bowls.

He may not have been a “blue chip” prospect out of high school but come August Chris Doleman will be forever immortalized in bronze.

Kendle is a researcher at the Pro Football Hall of Fame. He joined the Hall of Fame's staff in 2006.

The Drafting of the 2012 Class – Cortez Kennedy

The Seattle Seahawks bolstered their defense by trading up in the 1990 NFL Draft to grab Miami’s Cortez Kennedy.