The Drafting of the 2012 Class – Willie Roaf 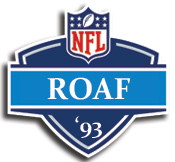 Perhaps it takes a Hall of Famer to know a Hall of Famer. Or, at least that’s how the 1993 NFL Draft played out for the New Orleans Saints. Future inductee Jim Finks was the General Manager of the team at the time. 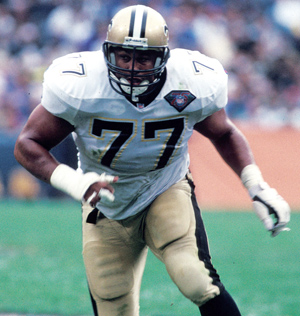 He had already turned the fortunes of a downtrodden franchise and developed them into perennial winners. But, he had a tough choice to make as the draft was approaching. A year earlier the Detroit Lions had attempted to sign the Saints’ defensive leader, linebacker Pat Swilling. Finks opted to match the offer. A year later, Detroit came calling again. This time, Finks felt comfortable enough with some young prospects who could battle for Swilling’s spot that he agreed to work a deal.

So, moments before the draft began on Apr. 25, 1993 at the Marriott Marquis in Manhattan, the announcement came that Finks had sent Swilling to Motown in exchange for the Lions’ first- and fourth-round picks.  It was one of seven trades that resulted in 11 switches of drafting order that took place before day’s end.

“This allowed us to move up and make our earliest selection since 1986,” commented Finks.

Now with possession of the eighth pick in the draft, Finks and head coach Jim Mora agreed that the perfect choice was 6’5”, 300-pound Willie Roaf out of Louisiana Tech. Roaf was the highest rated offensive lineman and the first picked in that year’s draft.  For the record, they used the other pick on running back Lorenzo Neal.

Roaf’s journey to New Orleans began at his high school, Pine Bluff (Ark.), the same alma mater of the legendary Green Bay Packers Hall of Famer Don Hutson. Roaf was named all-district in football and also lettered in basketball.  He further developed into a force to be reckoned with during his college career at Louisiana Tech.

By the time the 1993 NFL Draft was approaching, there was no doubt that Roaf was regarded as the best offensive lineman in the country. Scouting reports highlighted his impressive speed that he blended with his great strength and size. Furthermore, his powerful leg drive off the snap and his ability to cut quickly in the open field almost assuredly guaranteed he would receive the opportunity to go to the next level. That dream became a reality when the Saints went on the clock that April day in ’93.

Roaf proved to the Saints they made the right choice as he stepped right in as a rookie and earned the starting right tackle spot. He started every game at the spot and did not miss an offensive snap all season. His performance earned him consensus All-Rookie honors and he was named the Saints’ Offensive MVP. Roaf moved to left tackle the following season and continued to escalate his level of play. Roaf arguably became not only one of the best left tackles of his era but of all-time.

As it turned out, the 1993 draft was Finks’ last as he was diagnosed with cancer and died a year later. He was posthumously enshrined into the Pro Football Hall of Fame in 1995. This summer his bronze bust will have company when Roaf’s is set into place inside the Hall of Fame Gallery following Willie’s enshrinement in early August.

Fierle is the Manager-Digital Media/Communications at the Pro Football Hall of Fame. He joined the Hall of Fame's staff in 1988.

A large collection of artifacts and documents from Hall of Fame cornerback Jack Butler's football career has arrived in Canton.

The Drafting of the 2012 Class – Cortez Kennedy

The Seattle Seahawks bolstered their defense by trading up in the 1990 NFL Draft to grab Miami’s Cortez Kennedy.