Dermontti Dawson followed in the footsteps of Pittsburgh Steelers Hall of Fame center Mike Webster. Dawson quickly made a name for himself as his athleticism allowed him to be used as a “pulling” center on sweeps.

Dawson played right guard during his rookie season in 1988. When future Hall of Fame center Mike Webster retired from the Steelers following the season, Dawson won the center job.

His rookie season was shortened when he suffered a knee injury in a game against the Buffalo Bills. Dermontti sustained the injury when his uncle by marriage, Buffalo defensive end Art Still, fell on his leg during a pileup.

Dawson anchored the line that opened holes for Barry Foster, who led the AFC in rushing in 1992. Foster also tied an NFL record when he rushed for 100 yards in 12 games that year.

Named a center on the NFL’s All-Decade Team of the 1990s, Dawson spearheaded the Steelers powerful offensive line that helped to lead the team to a Super Bowl berth in 1995. He also led a Steelers offense in 1997 that was second in the NFL in rushing (143.7 yards) and first in fewest sacks allowed (21). He paved the way for Steelers running back Jerome Bettis, who ran for 1,655 yards, the second most in franchise history.

Dawson was the last active Steelers player who played for both Hall of Fame coach Chuck Noll and Bill Cowher.

Dermontti earned the first of his six All-NFL honors and was named co-AFC Offensive Lineman of the Year in 1993. Part of this success can be attributed to his durability. He played in 170 consecutive games from 1988-98.

Dawson is an owner of the Washington (Pa.) Wild Things, an independent league baseball team. From 1997 to 2001, the franchise, known then as the Canton Crocodiles, played its home games not far from the Hall of Fame at Thurman Munson Stadium.

“I don't know if he was the first center to snap the football and lead on the sweep, but I've never seen a center do it as good. The guy was a tremendous athlete, the strongest and probably most athletic offensive lineman I've ever seen.” - Hall of Fame cornerback Rod Woodson 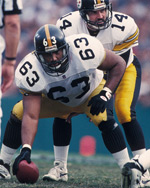 “To me he was the best athlete to ever play that position (center). He was very powerful and explosive, just a rare combination of quickness, explosion, and he was a very dependable player. This guy hardly ever missed a game.” - Hall of Fame cornerback and Steelers defensive coordinator Dick LeBeau

“He redefined the position. … When you look at the numbers we had in the running game, everything we did worked from the inside out, and to have a guy like Dermontti and such stability, that was a staple of every offense we had.” - former  Steelers head coach Bill Cowher

"He was one of the best players that we have ever played against at that position. He had exceptional quickness.” - New England Patriots head coach Bill Belichick

“You never had a center pull until Dermontti Dawson. He revolutionized and changed how teams ran the football in the NFL. ... Who knows if the Steelers would have evolved to where they are today in terms of running the football? It was because of him.” - ESPN analyst and former Steelers running back Merril Hoge

“He had all of the physical tools that were necessary – balance, strength, everything. … The great centers, and there aren’t many of them, block the nose tackle all by themselves, and Dermontti was one of those guys. That’s what makes him so special.” - Hall of Fame tackle Dan Dierdorf

Chris Doleman’s presence was always felt by teammates and opponents alike during a stellar career in which he recorded 150.5 sacks.

Big-play interceptions that capped Steelers comebacks and laudatory remarks from one of the game’s greatest wideouts described the career of Jack Butler.