History Published on : 10/3/2012
Part 4 of a series
By Neil Reynolds
Special to Profootballhof.com 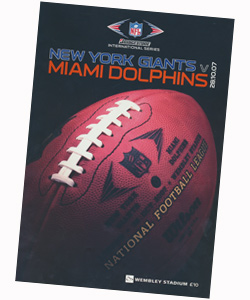 When the Miami Dolphins played host to the New York Giants in the inaugural International Series game in 2007, it marked the beginning of a new, ground-breaking chapter in “American” football on British ground.

Regular season games had finally arrived and that was something even the most optimistic British NFL fan could never have imagined possible when the sport first appeared on these shores with preseason friendlies in the late 1980s and early ‘90s.

While 2007 marked the first of five special nights for NFL fans in the United Kingdom, it also served as a big step for professional football in general as the Dolphins-Giants showdown was the first regular season game to be played outside of North America.

The five regular season games played to date have been very British affairs - but to find the starting point for this historic journey you have to go back, somewhat randomly, to 2001, the Chicago Bears and Soldier Field.

The Bears announced that they would play home games for the 2002 season at Memorial Stadium in Champaign, Ill., while necessary refurbishments were made to the legendary Soldier Field.

That news made NFL U.K. Managing Director Alistair Kirkwood sit up and take notice, even though he was in his London office 4,000 miles from the “Windy City.”

“We saw what was happening with the Bears, went to the NFL in New York and threw around the question of whether NFL games were transportable,” Kirkwood explained. “We identified that a regular season game would be the catalyst we needed to get our television partnerships right, reach new fans and also reach back to lapsed fans.

“We all agreed that friendly games and American Bowls were not going to be the answer because our fans know too much. We wanted NFL teams back, but in regular season games,” Kirkwood continued.

He and his staff worked long and hard to convince NFL management, team owners and, perhaps most importantly, head coaches that playing games in London was not only possible, but that it could be a massive success.

On the eve of Super Bowl XLI in South Florida in February 2007, it was a case of mission accomplished as the NFL announced that the Dolphins would be the first London “home” team and they would take on the Giants on Oct. 28, 2007.

{GALLERY}A registry of interest was set up via nfluk.com and the response was simply phenomenal. In the space of 72 hours, the NFL had received requests for 500,000 tickets.

Given that outstanding response, it came as no surprise that Wembley Stadium was sold out and packed to the rafters as the winless 0-7 Dolphins trotted onto the field to take on a red-hot 5-2 Giants team that had won five in a row after an 0-2 start.

It also came as no surprise to find that it was raining, although even by British standards this was really bad. It poured all day long and by the time the captains headed to midfield for the coin toss, the rain was pounding down and puddles were forming on the previously-pristine Wembley turf.

As the teams splashed their way through a first quarter that featured just three points via the boot of New York’s Scottish kicker Lawrence Tynes, Kirkwood was able to relax just a little and enjoy history unfolding before his very eyes.

“The kickoff of that Miami-New York game was my favorite moment from 2007,” Kirkwood admitted. “After all the build-up and the organization behind it, that was the moment when it became all about the action on the field. And that’s how it’s supposed to be.”

With a sell-out crowd of more than 81,000 sporting jerseys of all 32 teams and providing a colorful, passionate and noisy backdrop, the monsoon-like conditions were taking their toll down on the field. This was never going to turn into a vintage NFL contest. Points were clearly going to be at a premium.

The Giants tried to come out throwing and quickly realized that was a bad idea. Instead, they reverted to pounding away at the Miami defense with running back Brandon Jacobs, who responded with a career-high 131 yards on 23 carries.

In the second quarter, Eli Manning became the answer to a trivia question that will be asked years from now. Who was the first NFL player to score a regular season touchdown outside of North America?

Manning took the ball into the end zone on a 10-yard bootleg and the Giants were in firm control at halftime as they held a commanding 13-0 lead.

While the Big Blue could not score again – maybe they were too shocked at the appearance of a seemingly-obligatory streaker just after halftime - Miami left their comeback attempt a little too late and fell just short. Jay Feely kicked a 29-yard field goal in the third quarter before Cleo Lemon fired a 21-yard touchdown strike to diving wide receiver Ted Ginn, Jr. late in the final period.

But it was the Giants who hung on and took knees – to the annoyance of the British fans – to seal the victory.

As the fans hurried out into the rain in search of their late night trains and a much-needed change of clothes, players from both teams were excited to talk about their historic experience.

Manning, who would go on to lead the Giants to a dramatic Super Bowl win over the previously-undefeated New England Patriots later in that season, said: “The British fans were great. I hope the NFL continues to play games here. It felt like playing a normal regular season game, just in a different country. I know other teams will have to play one before us but hopefully we will be back. I know I would love to play in London again.”

“The atmosphere was phenomenal,” added Giants defensive end Michael Strahan. “It was like being at a game in the United States. It was a much better atmosphere than I anticipated and we’re glad the fans enjoyed it.”

Even the dispirited Dolphins, who would go on to post a 1-15 mark that season, knew they had been a part of something truly special at Wembley Stadium.

“It was like a Super Bowl at the start of the game with all the flashbulbs going off,” explained offensive lineman Rex Hadnot. “The atmosphere was great and we had a lot of fans cheering for us.”

“This was such a great experience for us,” added Pro Bowl linebacker Joey Porter. “This really was like the playoffs or even the Super Bowl. I have played in those games. We usually play in front of 60,000 spectators but playing in front of over 80,000 was great.” 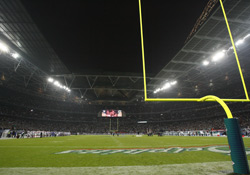 Since hosting the Dolphins and Giants in 2007, Kirkwood has seen the NFL go from strength to strength in the U.K. Television ratings are on an upward curve year after year and more young fans are getting into the sport and playing the game, making football the fastest-growing university sport in the U.K.

“We have now become a must-see calendar event,” Kirkwood concluded. “And it started on that rainy but memorable night at Wembley Stadium. The International Series has enabled us to strengthen our media partnerships and have acted as a meaningful platform for future growth of our sport.

“The International Series has allowed players and coaches to be exposed to high levels of passion and interest from NFL supporters in the U.K. And they certainly showed that passion in 2007. That Dolphins-Giants game put us at the forefront of having year-round conversations with players, coaches and owners from the NFL.”

Neil Reynolds has covered the NFL as a journalist and broadcaster since 1991. He is currently serving as co-presenter of NFL coverage in the United Kingdom on Sky Sports and also has experience presenting BBC Radio’s NFL coverage in 2009 and 2010. The author of “Pain Gang: Pro Football’s 50 Toughest Players,” Reynolds has worked for British football magazines First Down and Gridiron and has also written for American publications and websites such as NFL.com, the Green Bay Press-Gazette, the Atlanta Journal-Constitution and the Pittsburgh Post-Press Gazette. He currently writes for nfluk.com, SkySports.com and Sky.com and has interviewed some of the biggest names in football, including Jerry Rice, Joe Montana, Dan Marino, John Elway, Ray Lewis and Tom Brady.

Hall of Famer Mike Haynes was honored on Wednesday in Los Angeles.

A maximum of 250 guests will have the opportunity to meet members of the Pro Football Hall of Fame in a very intimate environment.