The story of William “Pudge” Heffelfinger and the birth of professional football 120 years ago is now well-known. Not many people, however, know the details about who Heffelfinger was as a person.


William Walter Heffelfinger was born on Dec. 20, 1867 in Minneapolis. Minn. His father was in the shoemaking business and dabbled in real estate.  “Pudge” played baseball and football at Central High School in Minneapolis before he matriculated to Yale University and attended the school from 1888 to 1891.
His exceptional and natural athletic ability earned him legendary status while at Yale. Playing on both the offensive and defensive lines, Heffelfinger was named to Walter Camp’s All-American Team three times. Yale was a major football power during that time as Heffelfinger helped lead the team to undefeated seasons in 1888 and ’91 along with one-loss seasons in 1889 and 1890. The 1888 team amazingly outscored their opponents 698-0 that season (see table to right).

At 6’3” 200 pounds, Heffelfinger was especially big for that era and towered over his opponents. His size allowed him to wreak havoc on opposing lines where it was said he would typically take out two to three players at a time. He also is credited with introducing the “pulling guard” play. Famous sportswriter Grantland Rice once referred to Heffelfinger as the greatest guard of all-time. By the time his days at Yale had finished, “Pudge” not only lettered in football but he also lettered in baseball, rowing, and track. 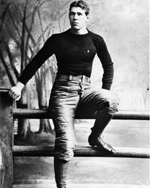 Following his days at Yale, Heffelfinger began a career in coaching where he made stops at the University of California, Lehigh University, and the University of Minnesota. He also frequently returned to Yale to help the football team prepare for contests against rivals Harvard and Princeton. In the 1930s he founded Heffelfinger Publications which produced sales booklet for football and baseball equipment.  He also spent time working for his father’s shoe business and later in the real estate business. Heffelfinger also found success in politics. He was a Minnesota delegate to the Republican National Conventions in 1904 and 1908. He also served as Hennepin (Minn.) County Commissioner from 1924-48 and even ran, although unsuccessfully, for Congress in 1930.

Throughout his life, “Pudge” maintained his playing shape.  Even in his 40s, it was common for him to return to Yale and the coach would give him a jersey and let him play with the second team during practice. In the early 1920s he played in a professional game against the Columbus Panhandles which featured the famous Nesser brothers. He continued as a regular in pro charity games up until his mid-60s. He played his last organized football game in a charity event in Minneapolis at the age of 65.

His fame as the game’s first documented professional player surfaced after his death. “Pudge," who was inducted into the College Football Hall of Fame in 1951, died on April 2, 1954 at the age of 86. He was buried at the small Hawley Cemetery outside Blessing, Texas.

This accounting ledger from a game played on November 12, 1892 in Pittsburgh is the first documented proof that a player was paid to play football.

Fit to be tied

For just the 21st time since the National Football League instituted overtime for regular season games in 1974, a game has ended in a tie.