Fact or Fiction? A team has gone an entire game without attempting a pass. 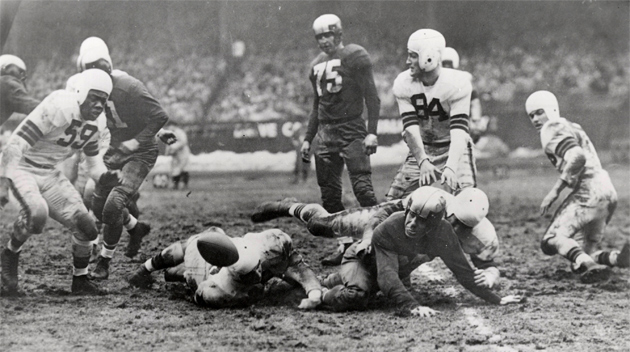 In today’s NFL, it’s hard to imagine a team not throwing the ball. While it has been more than six decades since it occurred, the truth is that a team has played an entire NFL game without attempting a single pass. In fact, it’s happened on five different occasions.

The last time it happened came in a much anticipated rematch of the Cleveland Browns and Philadelphia Eagles in Cleveland on Dec. 3, 1950 (photo above). The two teams had faced each other in the season opener in Philadelphia as the Browns shocked the Eagles 35-10. Cleveland had just entered the NFL after four dominating seasons in the rival All-America Football Conference and their first test came against Philly who were two-time defending NFL champions. Quarterback Otto Graham threw for 346 yards and three TDs as the Browns made a big statement to the football world.

Lore, or maybe some fact, has it that the Browns win was somewhat discredited by the Eagles and other NFL faithful. So, months later as the season winded down, apparently Cleveland’s iconic coach Paul Brown wanted to prove to the Eagles that his squad could beat them not only through the air but by running the ball.  Adding to the situation was that a big storm hit Cleveland and steady hard rain made for muddy conditions.

Cleveland downed Philadelphia 13-7 in the late-season matchup without officially throwing a pass. Actually, Graham had completed a 10-yard pass but the play was negated by a man in motion penalty. With the defeat, the Eagles two-year reign on the league ended as they were eliminated from playoff contention. Meanwhile, Cleveland rolled on en route to winning the NFL title that season.

Here are quick recaps of the other four games in which a team never attempted a pass. 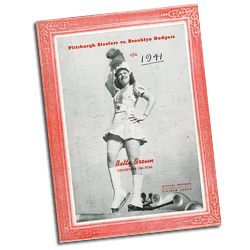 The Green Bay Packers shutout the visiting Portsmouth Spartans (who later became the Detroit Lions) 17-0 on Oct. 8, 1933. Driving rain made handling the ball difficult. The Packers two touchdowns were set up by a blocked punt and an interception. Green Bay did put the ball in the air once but that was for the PAT after a fourth quarter TD run.

Maybe the Detroit Lions had the right game plan on Sept. 10, 1937. The Lions never threw a pass in their 28-0 shellacking of the Cleveland Rams, who were making their NFL debut. An errant snap by Cleveland’s center was recovered in the end zone for a Detroit touchdown. Shortly thereafter, a Rams pass attempt was blocked and the Lions’ Tom Hupke alertly snagged it and ran it back 43 yards for six points.

The 0-7-1 Pittsburgh Steelers upset the Brooklyn Dodgers 14-7 on Nov. 16, 1941 to earn their first win of the season. The victory was fueled by halfback Art Jones who led the rushing attack that included his 25-yard touchdown run on a reverse. A newspaper account described Pittsburgh’s no pass attempts in the game as “almost gridiron heresy in the wide-open pro game.”

The Steelers entered the Nov. 13, 1949 game as more than a two-touchdown underdog to the visiting Los Angeles Rams. Pittsburgh made the most of the contest being played on an extremely muddy field and battled the heavily favored Rams to a 7-7 draw in what equated for a moral victory for the Steelers.  The conditions created for many oddball plays and the Rams barely escaped an embarrassing loss with a late one-yard TD plunge by Fred Gehrke and ensuing extra point by Bob Waterfield.

Fact or Fiction? A team has gone an entire game without attempting a pass.