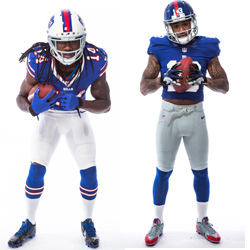 A longtime tradition of the National Football League is kicking off each season in Canton, Ohio. One day after the Enshrinement of the Hall’s newest members, the NFL preseason starts the road to the Super Bowl.

This year, the New York Giants and Buffalo Bills take the field at Pro Football Hall of Fame Field in the stadium adjacent to the museum. Two of the three top receivers taken in the 2014 NFL Draft will see their first game action as NFL players as the fourth overall pick Sammy Watkins of the Bills and 12th overall selection Odell Beckham, Jr. of the Giants take center stage. The 2014 NFL/Hall of Fame Game on Sunday, Aug. 3 kickoffs at 8:00 p.m.

“I’m definitely excited for the opportunity to experience my pro debut at the Hall of Fame Game. It was one of the first things I noticed when I looked at the schedule after being drafted by the Bills,” Watkins shared. “Growing up a Bills fan, the chance to play in Canton on the same weekend that Andre Reed gets inducted into the Hall will be surreal.”

Beckham shared Watkins’ enthusiasm, “When I learned that I’ll be making my NFL debut at the Hall of Fame Game, my initial reaction was ‘Wow’. It’s the first game since the Super Bowl, so I’m sure everyone will be tuning in to get their football fix. It will also be an important first step for me, as I get my first experience playing against NFL players. I’m using the off-season program to learn what it takes to be a pro. The Hall of Fame Game is going to teach me what it takes to play like one.”

Watkins and Beckham hope to follow in the footsteps of many notable NFL players who made their debut in the annual preseason classic.

Notable NFL Stars who started their pro careers in Canton


Three members of the Pro Football Hall of Fame began their professional football careers in the NFL/Hall of Fame Game. The Hall of Fame trio all played in the early years of the preseason series. Washington Redskins linebacker Chris Hanburger helped lead his team to a victory over the Detroit Lions in 1965. Jack Youngblood began his career as a menacing defensive end with the Los Angeles Rams in a 17-6 victory over the Houston Oilers in the 1971 NFL/Hall of Fame Game. John Hannah, who is often described as the finest guard of all-time, cut his teeth in 1973 when his New England Patriots faced the San Francisco 49ers in Canton.

Many other notable players, many of whom may someday be honored in the Hall of Fame, started their pro careers in Canton. Wide receiver Marvin Harrison played as a rookie with the Indianapolis Colts in a victorious matchup against the New Orleans Saints in 1996. Hines Ward launched his tremendous career with the Pittsburgh Steelers in 1998 against the Tampa Bay Buccaneers. Two years later, quarterback Tom Brady helped lead the New England Patriots to victory over the San Francisco 49ers in his first NFL game action.

Here is a list of many noteworthy players who debuted in the NFL/Hall of Fame Game:

A special exhibit “From Pads to Palette, Celebrating the Art of Ernie Barnes (1938-2009)” will be on display at the Pro Football Hall of Fame starting June 19.