Enshrinement Published on : 7/17/2014
The seven members of the Class of 2014 – Derrick Brooks, Ray Guy, Claude Humphrey, Walter Jones, Andre Reed, Michael Strahan, and Aeneas Williams – will take center stage during the upcoming Pro Football Hall of Fame Enshrinement Weekend, Aug. 1-3. At their side throughout the great celebration will be the individual each has selected to serve as their presenter for enshrinement into the Hall of Fame.

This year’s group of presenters includes a daughter, a father, two young sons, a member of the media, and two Hall of Fame head coaches.

Michael Strahan has chosen his longtime friend and FOX NFL Sunday “teammate” Jay Glazer to present him. Glazer is a veteran FOX Sports NFL Insider and has worked alongside Strahan for many years. 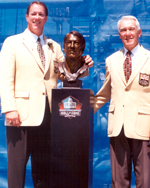 Hall of Fame coaches Marv Levy (Class of 2001) and John Madden (Class of 2006) both return to the Enshrinement stage for the third time as a presenter. Levy will present wide receiver Andre Reed and Madden will serve as the presenter for punter Ray Guy. Levy and Madden also shared the stage in 2002 when they presented Jim Kelly and Dave Casper, respectively. In addition, Madden presented owner Al Davis in 1992 and Levy served as a presenter for Thurman Thomas in 2007.

“Obviously, my first preference was having all of my kids say something but I had to pick just one,” Brooks stated about son Decalon. “Since he started playing football, I’ve always been directly involved with him, and now he gets a chance to be directly involved with me. I am anxious to see what he says representing his brothers and sisters.”

Lawrence Williams will be the seventh father to present his son for Enshrinement into the Pro Football Hall of Fame when he presents Aeneas Williams this year. Other Gold Jackets who’ve been presented by their father include Willie Roaf (2012), Steve Young (2005), Barry Sanders (2004), Marcus Allen (2003), and Ronnie Lott (2000). John Hannah was the first Hall of Famer to pick his dad as a presenter when Herb Hannah, a former NFL player, served in that role in 1991.

Then, at the Enshrinement Ceremony on Saturday, Aug. 2, dramatic video presentations will be broadcast to the fans in attendance at Pro Football Hall of Fame Field as well as to the national television audiences tuning in on NFL Network and ESPN. Each member of the Class of 2014 will then have their presenter accompany them to the Enshrinement podium where together they will unveil the Hall of Famer’s bronze bust for the first time.

Who’s who of football’s greatest will join Class of 2014 during Enshrinement Weekend.