Believe it or not, the dropkick remains a legal maneuver in the National Football League today. It still exists in the NFL's official rule book. Rule 3, Section 18, Article 1, Item 1 defines the dropkick as, "a kick by a player who drops the ball and kicks it as, or immediately after, it touches the ground."

Obviously, the New England Patriots were well aware of this fact. They are the only team to utilize the rarely seen tactic in over 60 years. Pats special-teamer Nate Ebner dropped kicked the ball, in an attempt to catch the visiting Philadelphia Eagles off guard, during a kickoff in the second quarter of their game on Dec. 6. Prior to that, in the team's 2005 regular season finale against the Miami Dolphins, New England quarterback Doug Flutie dropkicked an extra point following a touchdown in the fourth quarter.  Flutie's point-after-attempt was the first drop kick converted in the NFL since 1941.

Some of the legends who've been permanently honored in the Pro Football Hall of Fame were masters of the dropkick. Names like Jim Thorpe, Wilbur "Pete" Henry, and Paddy Driscoll were known to have entertained pro football crowds with their extraordinary talent of dropkicking. Albeit, some of their exploits were exaggerated but nevertheless the dropkick was an integral part of the game in the 1920s and 1930s. It was during this era that the football slightly resembled a rugby ball. Numerous rule changes affecting the shape of the ball took place during the early years of the NFL. Changes to the ball essentially ended by 1934 as it took its familiar shape of a prolate spheroid. As a result, the number of dropkicks attempted in the NFL diminished significantly in subsequent years.

It wasn't until 1963, however, that the league removed the category of dropkicked field goals from the record book. Driscoll shared the two major records for dropkicking when he booted four field goals (23, 18, 50 and 35 yards) for the Chicago Cardinals in a 19-9 win over the Columbus Tigers on October 11, 1925. That mark was equaled by the Kansas City Cowboys' Elbert Bloodgood. His four dropkicked field goals were from 35, 32, 20, and 25 yards as Kansas City edged the Duluth Eskimos, 12-7, on December 12, 1926. 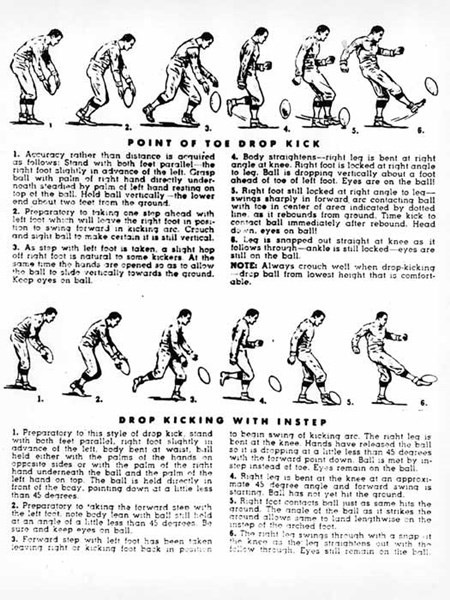 Driscoll's 50-yarder was also an NFL best and matched the record-tying kick he made one year earlier in a game against the Milwaukee Badgers on September 28, 1924. The Cardinals defeated Milwaukee, 17-7.

Prior to Flutie drop-kicking the PAT on January 1, 2006, Ray “Scooter” McLean of the Chicago Bears was the last player to successfully drop kick in the NFL. McLean converted an extra point following Ken Kavanaugh's 42-yard fumble recovery for a touchdown during the Bears' 37-9 win over the New York Giants in the 1941 NFL Championship Game. The drop kick came in the fourth quarter of the title game played on December 21, 1941.

Hall of Famer Earl "Dutch" Clark  is believed to be the last player to successfully dropkick a field goal in the NFL. According to game accounts, he dropkicked a 17-yard field goal in the Detroit Lions 16-7 victory over the Chicago Cardinals on September 19, 1937. 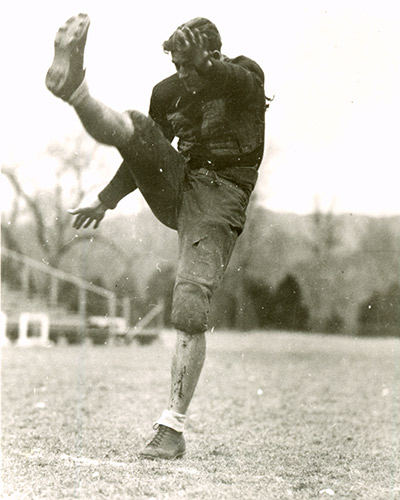 Hall of Famer Dutch Clark was a master of the drop kick.

The Pro Football Hall of Fame and Ford Motor Company paid tribute to Gold Jacket Derrick Brooks at his high school alma mater on Monday afternoon as part of the Hometown Hall of Famer™ program.

The Arizona Cardinals and St. Louis Rams battle in a Week 13 NFC West showdown for the second time this season.