Although Hall of Fame bylaws call for the selection of 25 semifinalists they also provide that the semifinalist list includes all ties for the twenty-fifth position, as has occurred this year with the total of 27 semifinalists

Four other players – safety LeRoy Butler, defensive ends Leslie O’Neal and Simeon Rice, and cornerback Everson Walls – although previously eligible for the Hall, are semifinalists for the first time. All other individuals on the 2018 list have been a semifinalist in previous years. 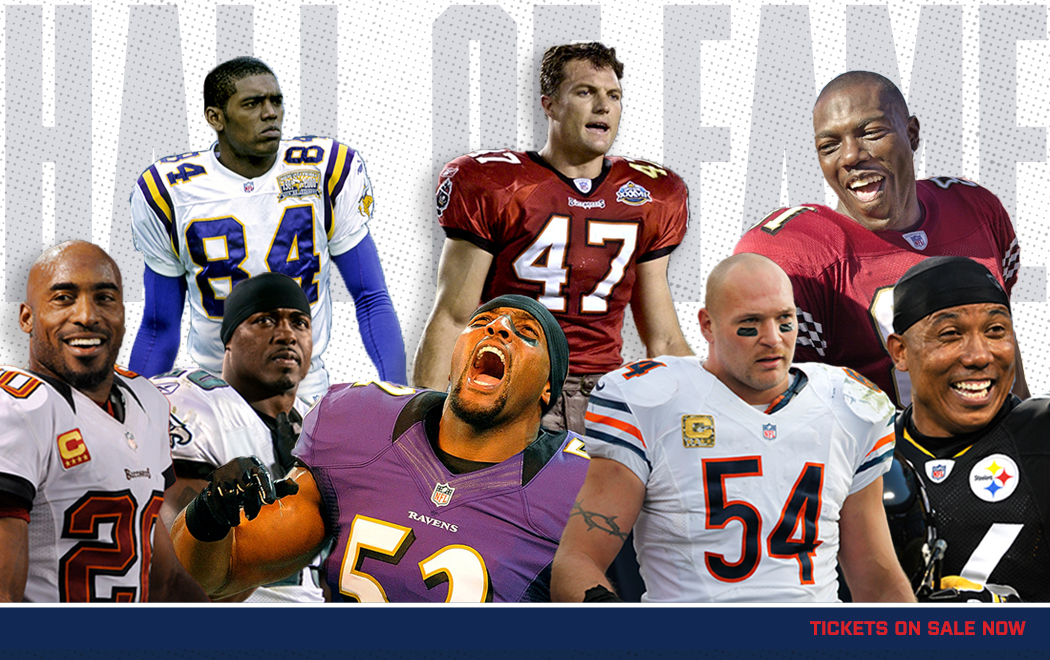 The year-round selection process is integral in fulfilling the Pro Football Hall of Fame’s important mission to “Honor the Heroes of the Game, Preserve its History, Promote its Values and Celebrate Excellence EVERYWHERE.”

The following is the complete list of 2018 Modern-Era semifinalists, including their positions, years, and teams. Also listed are the number of times and years the individual has been named a semifinalist since this reduction vote was added to the Selection Committee Bylaws in 2004.

To be considered for election to the Pro Football Hall of Fame, a nominated player or coach must not have participated as an active player or coach for five consecutive seasons.

The list of semifinalists was reduced from an initial group of 108 nominees. The next step in the selection process comes in January when the semifinalists are trimmed to 15 Modern-Era Finalists. That list increases to 18 finalists with the inclusion of the recommended nominees of the Hall of Fame’s Contributors and Seniors Committees. The 2018 Contributor Finalist is former General Manager/Personnel Administrator Bobby Beathard (1966-67 Kansas City Chiefs, 1968-1971 Atlanta Falcons, 1972-77 Miami Dolphins, 1978-1988 Washington Redskins, 1990-99 San Diego Chargers). The two Senior Finalists are Robert Brazile (LB – 1975-1984 Houston Oilers) and Jerry Kramer (G – 1958-1968 Green Bay Packers).

Beathard, Brazile and Kramer will be voted on separately and, like all other finalists, must receive 80% positive vote from the full Selection Committee on “Selection Saturday” at the annual selection meeting on Feb. 3, 2018 in Minneapolis, Minn., the day before Super Bowl LII.

The Pro Football Hall of Fame’s current bylaws stipulate that between four and eight new members will be selected each year. No more than five Modern-Era Finalists can be elected in a given year. Therefore, a class of six, seven, or eight can only be achieved if one or more of the Contributor and Senior Finalists are elected.

The Pro Football Hall of Fame’s Class of 2018 will be announced during NFL Honors, a two-hour primetime awards special to air nationally on the eve of the Super Bowl at 9 p.m. (ET and PT) on NBC. NFL Honors will be taped earlier that evening at the Cyrus Northrop Memorial Auditorium at the University of Minnesota in Minneapolis from 5-7 p.m. (local) when the 2018 Hall of Fame class will be introduced for the first time. In addition, the NFL and The Associated Press will announce their annual accolades in this awards show with the winners on hand to accept their awards.

Official Ticket Packages for the 2018 Pro Football Hall of Fame Enshrinement Week Powered by Johnson Controls are on sale now at http://www.hofexperiences.com/ or by calling 844-751-0532. A variety of ticket packages, starting at $285, provide fans with VIP experiences, premium seating and parties with Hall of Famers. Packages range from event day offerings to four-day experiences that include a multitude of exclusive extras.

The Finalists will be honored during the Black College Football Hall of Fame Induction Ceremony in Atlanta, Georgia on February 10, 2018.