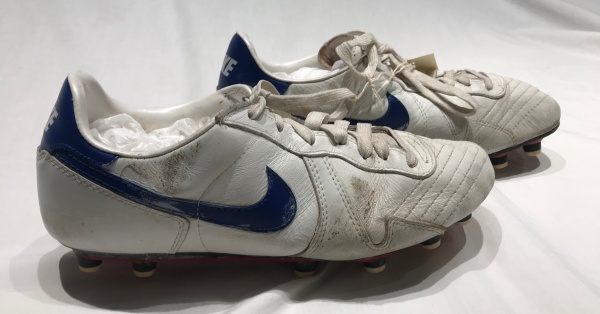 He also won a gold medal in 1984 Los Angeles Summer Olympics as a member of the 400-meter relay team. Four days after winning the gold medal the Los Angeles Rams signed him to a four-year contract.

Brown was initially drafted out of Arizona State by the Cleveland Browns in the second round of the 1983 NFL Draft but the choose to pursue his Olympic dreams instead of signing for the Browns. At the time the United States Olympic team required amateur status.

Naturally Brown became a deep threat and a dangerous return man with the Rams. One of the highlights of his career came on a December 9, 1985 Monday Night Football game between the Rams and San Francisco 49ers when he returned the opening second half kickoff for an 86-yard touchdown. The touchdown was the deciding points in the Rams 27-20 victory over the 49ers.

The Week 14 win ultimately led to the Rams to their only NFC West Divisional title the only divisional title the Rams were able to wrestle away from Joe Montana led 49ers teams of the 1980s. Brown’s 32.8 yard kickoff return average and three kickoff touchdown returns led the NFL that season and earned him Pro Bowl and All-Pro honors. Brown also won the NFL’s “Fastest Man” contest twice.

Our weekly artifacts and other unique items are featured daily in our docent presentations for visitors of the Pro Football Hall of Fame. Plan your visit to the Hall to learn more about the collection in our archives.

Football and America chronicles the NFL's response during national crises and military conflicts.

Highlighting the 2018 NFL Draft in Dallas

The 2018 draft was a big step for the NFL as it was the first time it was hosted inside an NFL Stadium.