Getty Images staff photographer Rob Carr is the winner of the Dave Boss Award of Excellence for his entry in the 50th Annual Pro Football Hall of Fame Photo Contest. His photo titled “Eagle Eye," was selected by a panel of judges as the Photograph of the Year for the 2017 National Football League Season. 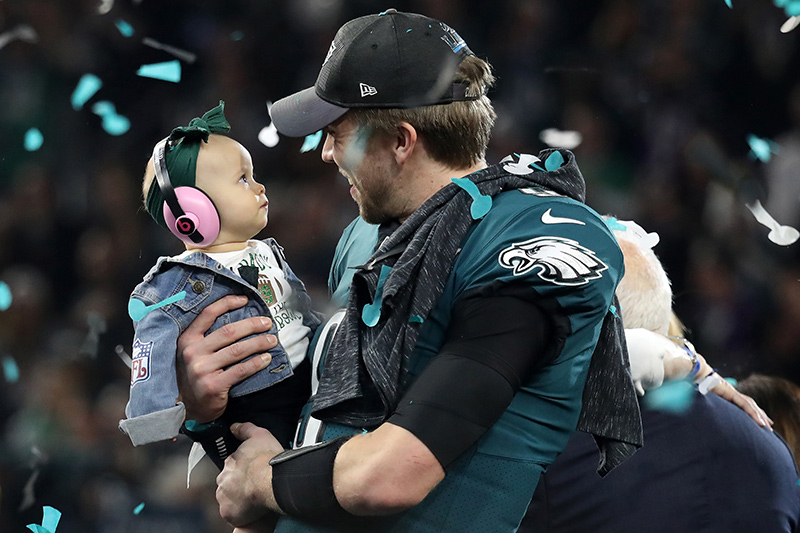 The image captured Philadelphia Eagles quarterback Nick Foles’ loving gaze into the eyes of his daughter Lily after his MVP performance in the Eagles’ 41-33 victory over the New England Patriots in Super Bowl LII at U.S. Bank Stadium in Minneapolis, Minn. on Feb. 4, 2018.

Carr, a graduate of Eastern Kentucky University, began his career in the late-1980s working for a small daily newspaper in Frankfort, Ky. He then worked for the Associated Press in Alabama and Baltimore where he covered both news and sports before joining Getty Images in 2011.

The Hall of Fame’s prestigious contest is open to professional photographers on assignment to cover NFL games. Photos taken during the 2017 NFL season, that included Super Bowl LII and the 2018 Pro Bowl, were eligible.

Carr’s entry was the first-place winner in the feature category while NFL photographer Logan Bowles was first in the Action category. His photo “Take Off for Six” shows Atlanta Falcons wide receiver Julio Jones diving in midair toward an end zone pylon for a touchdown during the Falcons game vs. the Tampa Bay Buccaneers on Nov. 26, 2017.

Carr will be officially honored at the Enshrinees Roundtable, part of the 2018 Pro Football Hall of Fame Enshrinement Week Powered by Johnson Controls. The enshrinement of the Class of 2018 – Bobby Beathard, Robert Brazile, Brian Dawkins, Jerry Kramer, Ray Lewis, Randy Moss, Terrell Owens, and Brian Urlacher – will take place on Saturday, Aug. 4. The Enshrinees Roundtable is held on Sunday, Aug. 5.

Dave Boss Award of Excellence, 2017 (Photo of the Year)

On the Road to Excellence: James Lofton

Latest installment in our series that delivers an up-close look at Hall of Famers.

More than 350 teams expected to compete from around the world in football's biggest youth showcase.