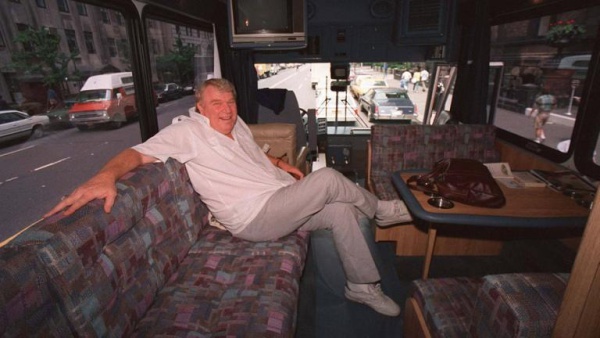 The original Greyhound bus was converted into the “Madden Cruiser” in 1987. Madden transitioned from his Hall of Fame coaching career into what became an iconic broadcasting career and decided he no longer wanted to fly. He opted to travel long distances by train until it became inconvenient and decided a bus would be the perfect alternative.

The interior of the “Madden Cruiser” is in its original condition and features what was then, state-of-the-art technology, that includes two color televisions, a telephone and intercommunications system, a citizens band radio, two laser disc players, a built-in vacuum cleaner, a stereo system and a videotape player. There is also a queen-size bed in a private bedroom along with a full bathroom and a kitchenette complete with a microwave oven. The bus was driven by several drivers over the years, but Willie Yarbrough of Los Angeles was the first driver of the “Madden Cruiser” that covered 55,000 miles in that first year.

“We’ve kept the original ‘Madden Cruiser’ for all these years, and when it came for us to decide what we were going to do with it in perpetuity, the only place which made sense was the Pro Football Hall of Fame. We asked to donate it and they accepted and we are happy that it will be there forever,” shared Madden.

Turbo Images coordinated with Greyhound to restore the exterior to its original look. Through the efforts of Turbo Images President Pier Veilleux, the company donated their services to wrap the outside of the bus to make it look as it did in 1987.

The “Madden Cruiser” will make its official debut when it transports to the Museum the new Vince Lombardi Trophy that will be awarded to the champions of Super Bowl LIII.

Hall of Fame President David Baker will step off the “Madden Cruiser” with the iconic trophy and hand it to the Hall’s Collections Curator Jason Aikens to be placed on exhibit that evening. Fans will be able to enjoy viewing the trophy throughout the season before it is removed a few weeks prior to Super Bowl LIII and shipped to Atlanta for the game.

The “Madden Cruiser” will be parked in the Hall’s main parking lot for fans to step onto for a glimpse inside during the 2018 Enshrinement Week Powered by Johnson Controls from Aug. 2-5.

HOF Productions debuts their latest video dissecting the traits that make up the Hall of Famers who represent the Pro Football Hall of Fame.