Hall of Famer Tommy McDonald passed away this morning at the age of 84.

“Tommy McDonald lived life like he played the game of football. He was charismatic, passionate and had fun. He was such a character. Heaven is a happier place today.

The entire Hall of Fame family that includes his fellow Hall of Famers, the Board of Trustees and staff share our heartfelt condolences with the McDonald family. The flag at the Pro Football Hall of Fame will fly at half-staff in Tommy’s memory.

Tommy’s legacy will forever live in Canton, Ohio through his bronzed bust that is a symbol of his many great accomplishments. His impact on the Game serves as inspiration to generations of fans.” 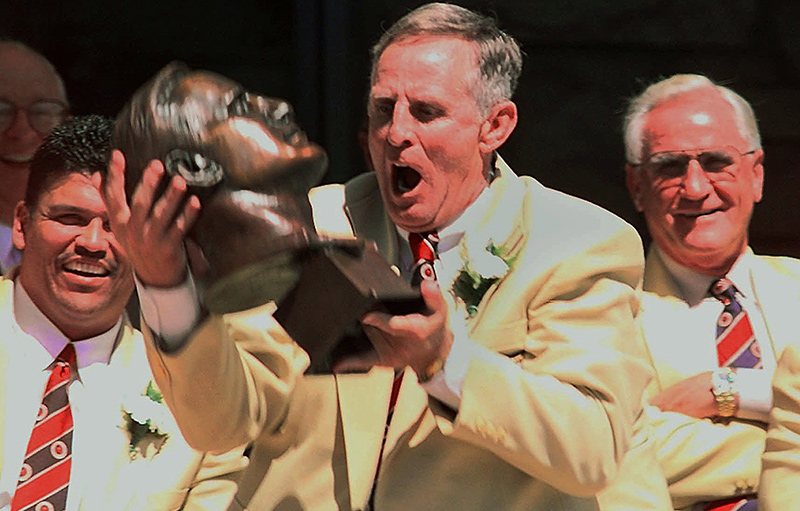 McDonald was a third-round draft pick of the Philadelphia Eagles in 1957. An All-America choice at Oklahoma, he won the Maxwell Award in 1956 as college football’s player of the year. During his three years of varsity play at Oklahoma, the Sooners never lost a game.

Although he was just 5-9 and 176 pounds, McDonald was extremely durable and missed only three games in his first 11 seasons. He had elusive speed and used his running skills brilliantly after making his catches, finishing his career with an average of 17 yards per catch and 84 touchdowns.

A sure-handed receiver, McDonald had few peers when it came to putting the ball in the end zone. In the years 1958-62, he had 56 touchdown receptions in 63 games, including a 35-yard touchdown reception from quarterback Norm Van Brocklin in the 1960 NFL Championship Game in which the Eagles defeated the Green Bay Packers 17-13.

His career ratio of touchdowns-to-receptions is an impressive 1 in 5.9. He also caught at least one pass in 93 consecutive games. Used primarily as a kickoff and punt-return specialist during his rookie season, McDonald ranked sixth all-time in receptions (495), fourth in yards receiving (8,410) and second in touchdown catches (84) when he retired following the 1968 season.

McDonald, who was born in Roy, New Mexico, had an outstanding season in 1961. Not only did he lead the NFL in reception yardage (1,144) and in touchdowns (13), but in a game against the New York Giants he caught seven passes for 237 yards and two touchdowns, which is still an Eagles’ single-game best.

He shared with ESPN how he created the business:

“By chance, I lucked into it. A guy did a portrait of me. In the old days, the club would furnish you with pictures so you could send it out to fans. So I sent a picture out to this guy. After one of my games, I come out of the dressing room and this guy is standing out there with a box, about 16x20 and he pulls a painting. It was fantastic. He tells me that he wants me to have it because he's a big fan of mine and he appreciated me sending him out an autographed picture. I wanted to pay him for it, but he wouldn't let me. I pulled out a picture of my wife from my wallet and asked him if he could do portrait of her because her birthday was coming up in a couple of months. I said he had to let me pay him and he said OK. The portrait was magnificent. Then I thought about it and of all the rings, watches, trophies and silver trays, nobody gives something like (the portraits). I'm telling you it was a gold mine. Hey, what guy is going to throw rocks at his own portrait? Nobody is going to hate himself. It just blossomed into a great business,” explained McDonald.

McDonald was enshrined into the Pro Football Hall of Fame in 1998.