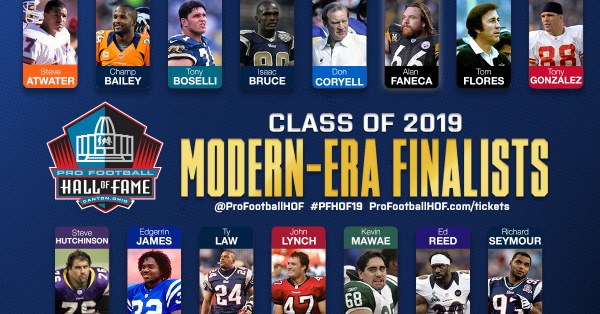 The 15 Modern-Era Finalists for the Pro Football Hall of Fame’s Class of 2019 includes five individuals who are finalists for the first time. The list includes three first-year eligible players with cornerback Champ Bailey, tight end Tony Gonzalez and safety Ed Reed. Two others, coach Tom Flores and defensive lineman Richard Seymour, have been previously eligible for the Hall of Fame but this year marks their first time as finalists.

The 15 Modern-Era Finalists will be considered for election to the Hall of Fame when the Hall’s Selection Committee meets on “Selection Saturday” in Atlanta the day before Super Bowl LIII to elect the new class. The Modern-Era Finalists were determined by a vote of the Hall’s Selection Committee from a list of 103 nominees that was earlier reduced to 25 semifinalists, during the year-long selection process.

The 2019 Modern-Era Finalists with their positions, years and teams:

The 15 Modern-Era Finalists join three other finalists to comprise 18 finalists under consideration for the Pro Football Hall of Fame’s Class of 2019.

One Senior Finalist was announced in August 2018 by the Seniors Committee that reviews the qualifications of those players whose careers ended more than 25 years ago.

Two Contributor Finalists, also announced in August, were selected by the Hall of Fame’s Contributors Committee that considers persons, other than players and coaches, who made outstanding contributions to professional football.

To be elected, a finalist must receive a minimum positive vote of 80 percent during the annual selection meeting.

To be eligible for election, modern-era players and coaches must have last played or coached more than five seasons ago. Since contributors need not be retired to be eligible, there is no specific year of eligibility for Pat Bowlen or Gil Brandt.

The selectors will thoroughly discuss the careers of each of the 18 finalists. Although there is no set number for any class of enshrinees, the Pro Football Hall of Fame’s By-Laws stipulate that between four and eight new members will be selected each year. No more than five Modern-Era Finalists can be elected in a given year and thus a class of six, seven, or eight can only be achieved if the Senior Finalist and/or one or both Contributors Finalists are elected. Representatives of the accounting firm Deloitte & Touche will tabulate all votes during the meeting.

The Pro Football Hall of Fame’s Class of 2019 will be announced during NFL Honors, a two-hour primetime awards special to air nationally on the eve of Super Bowl LIII at 9 p.m. (ET and PT) on CBS. NFL Honors will be taped earlier that evening at the Fox Theatre in Atlanta from 5-7 p.m. (local) when the 2019 Hall of Fame Class will be introduced for the first time. In addition, the NFL and The Associated Press will announce their annual accolades in this awards show with the winners on hand to accept their awards.

PAT BOWLEN
Owner … Oklahoma … 1984-Present Denver Broncos
Bowlen shaped the Broncos into one of the most storied franchises in NFL history during his 35 years as owner … Engrained winning culture into organization with immediate results … Broncos posted 13-3 record to win AFC West in Bowlen’s first season, 1984 … Sustained and unprecedented success over past three decades has resulted in more than 350 victories, seven Super Bowl appearances and regular-season winning percentage of .603 (1984-2017) … With Bowlen at helm, Broncos have advanced to playoffs 18 times, won 13 division crowns, seven AFC conference championships and three Super Bowl titles (XXXII, XXXIII and 50) … Under his leadership, the Broncos are only NFL team to post 90 or more victories in each of the past three decades … Broncos victory total since Bowlen took over as owner is second most in NFL …  Led effort for state-of-the-art Broncos Stadium at Mile High that opened in 2001 …. Member of numerous NFL committees over career including co-chair of NFL Management Council Executive Committee … Key figure to securing NFL’s labor and TV contracts …  As Chair of NFL Broadcast Committee was responsible for negotiations of $18 billion TV contract, the most lucrative in single-sport history … Named to Broncos Ring of Fame, 2015 … Born Feb. 18, 1944 in Praire du Chien, Wisconsin.

Historic half-century career in pro football … As vice president of personnel for the Cowboys, helped build one of most dominant franchises in all of sports … Integral talent scout for Cowboys and member of team’s brain trust along with Hall of Famers Tex Schramm and Tom Landry since inception in 1960 through 1988 … Developed innovative scouting and management of personnel systems … Many innovations are standard process for NFL teams today … Early user of computer analysis to evaluate players … Discovered number of free agents such as wide receiver Drew Pearson and defensive backs Cliff Harris and Everson Walls … Responsible for building rosters that led Cowboys to winning records in 20 consecutive seasons (1966-1985) … Cowboys registered 10 or more wins in a season 16 times during period … Helped Dallas to 13 division titles, six conference championships and two Super Bowl victories (VI and XII) … Joined NFL.com at its inception in 1995 and has been key contributor ever since … Regarded as top draft expert … Serves as resident historian for NFL.com and has provided countless number of columns about league’s significant events and players … A regular radio personality on SiriusXM NFL Radio … Born March 4, 1933 in Milwaukee, Wisconsin.

IF ELECTED … SPECIAL NOTES ON 2019 FINALISTS

List of finalists and Hall of Famers by team in which significant or major portion of career was spent.

THE POSITION ROSTER WILL CHANGE AFTER 2019 ELECTION

List of finalists by Modern-Era position. Modern-Era is defined as a majority of an enshrinee’s career which occurred after 1946.

The Pro Football Hall of Fame Enshrinement Week Powered by Johnson Controls, a multi-day celebration of the enshrinement of the newest Hall of Fame Class, is held each year in Canton. The Class of 2019 will be formally enshrined on Saturday, Aug. 3, 2019.

The Hall of Fame Game, Enshrinement Ceremony and the Concert for Legends, will be held in the world-class Tom Benson Hall of Fame Stadium. The venue is a key component of Johnson Controls Hall of Fame Village that is currently under construction on the Hall’s campus.

Official ticket packages for the 2019 Pro Football Hall of Fame Enshrinement Week Powered by Johnson Controls are on sale now at www.hofexperiences.com or by calling 844-751-0532. A variety of ticket packages, starting at $299, provide fans with VIP experiences, premium seating and parties with Hall of Famers. Packages range from event day offerings to four-day experiences that include a multitude of exclusive extras.

Individual tickets to the 2019 Enshrinement Week Powered by Johnson Controls will go on sale at a later date.

Clay Matthews has never officially stumped for his dad’s Pro Football Hall of Fame candidacy, but he does think if he can make it to the next stage of the process, the voters will have an interesting discussion about his dad’s career.