“Selection Saturday” resulted in eight “Heroes of the Game” earning election to the Pro Football Hall of Fame. The Hall’s 48-person selection committee held its annual meeting today in Atlanta to elect the Class of 2019.

Today’s annual selection meeting capped a year-round selection process. The newly elected Hall of Famers were chosen from a list of 18 finalists who had been determined earlier by the Pro Football Hall of Fame’s Selection Committee. Representatives of the accounting firm Deloitte & Touche tabulated all votes during Saturday’s meeting.

Bowlen shaped the Broncos into one of the most storied franchises in NFL history during his 35 years as owner … Engrained winning culture into organization with immediate results … Broncos posted 13-3 record to win AFC West in Bowlen’s first season, 1984 … Sustained and unprecedented success over past three decades has resulted in more than 350 victories, seven Super Bowl appearances and regular-season winning percentage of .603 (1984-2017) … With Bowlen at helm, Broncos have advanced to playoffs 18 times, won 13 division crowns, seven AFC conference championships and three Super Bowl titles (XXXII, XXXIII and 50) … Under his leadership, the Broncos are only NFL team to post 90 or more victories in each of the past three decades … Broncos victory total since Bowlen took over as owner is second most in NFL …  Led effort for state-of-the-art Broncos Stadium at Mile High that opened in 2001 …. Member of numerous NFL committees over career including co-chair of NFL Management Council Executive Committee … Key figure to securing NFL’s labor and TV contracts …  As Chair of NFL Broadcast Committee was responsible for negotiations of $18 billion TV contract, the most lucrative in single-sport history … Named to Broncos Ring of Fame, 2015 … Born Feb. 18, 1944 in Praire du Chien, Wisconsin.

Historic half-century career in pro football … As vice president of personnel for the Cowboys, helped build one of most dominant franchises in all of sports … Integral talent scout for Cowboys and member of team’s brain trust along with Hall of Famers Tex Schramm and Tom Landry since inception in 1960 through 1988 … Developed innovative scouting and management of personnel systems … Many innovations are standard process for NFL teams today … Early user of computer analysis to evaluate players … Discovered number of free agents such as wide receiver Drew Pearson and defensive backs Cliff Harris and Everson Walls … Responsible for building rosters that led Cowboys to winning records in 20 consecutive seasons (1966-1985) … Cowboys registered 10 or more wins in a season 16 times during period … Helped Dallas to 13 division titles, six conference championships and two Super Bowl victories (VI and XII) … Joined NFL.com at its inception in 1995 and has been key contributor ever since … Regarded as top draft expert … Serves as resident historian for NFL.com and has provided countless number of columns about league’s significant events and players … A regular radio personality on SiriusXM NFL Radio … Born March 4, 1933 in Milwaukee, Wisconsin.

The first order of business for the Selection Committee at today’s meeting was to discuss and debate the merits of the Seniors Finalist, Robinson. He was required to receive at least an 80 percent positive vote to earn election. Next, the careers of Bowlen and Brandt, this year’s Contributors Finalists, were reviewed. Like all other Finalists, the Contributors Finalists needed a minimum 80 percent positive vote to be elected.

The Selection Committee then presented and reviewed the 15 Modern-Era Finalists that included two cut downs in the process. The first cut of finalists was from 15 to 10. The five eliminated from consideration at that point were Isaac Bruce, Don Coryell, Tom Flores, John Lynch and Richard Seymour. The final 10 finalists were reduced to five. Removed at that point were Steve Atwater, Tony Boselli, Alan Faneca, Steve Hutchinson and Edgerrin James.

The five remaining finalists – Bailey, Gonzalez, Law, Mawae and Reed – were then voted on individually and all five received the necessary 80 percent positive vote from the Selection Committee to be elected.

The Hall of Fame’s membership, including the newly elected Class of 2019, now stands at 326.

The Hall of Fame Game, Enshrinement Ceremony and the Concert for Legends, will be held in the world-class Tom Benson Hall of Fame Stadium. The venue is a key component of Johnson Controls Hall of Fame Village that is currently under construction on the Hall’s campus.

More than 130 Gold Jackets (living Hall of Famers) return to the Hall of Fame each year to be a part of the Enshrinement Week Powered by Johnson Controls. Nowhere else are fans able to see and interact with as many Hall of Famers in one place at one time as in Canton during the annual celebration.

Official ticket packages for the 2019 Pro Football Hall of Fame Enshrinement Week Powered by Johnson Controls are on sale now at www.hofexperiences.com or by calling 844-751-0532. A variety of ticket packages, starting at $299, provide fans with VIP experiences, premium seating and parties with Hall of Famers. Packages range from event day offerings to four-day experiences that include a multitude of exclusive extras.

Individual tickets to the 2019 Hall of Fame Game (teams to be determined) and Enshrinement Ceremony of Bailey, Bowlen, Brandt, Gonzalez, Law, Mawae, Reed, and Robinson will go on sale Friday, March 15 and will be available at: http://www.profootballhof.com/tickets 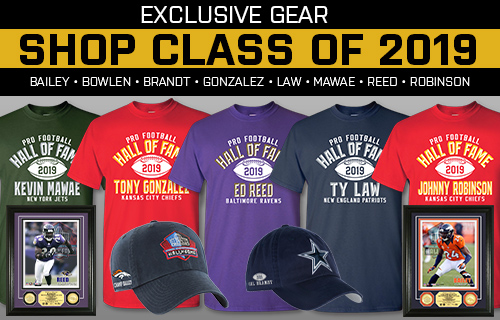 Williams was a devout Christian throughout his playing career, regularly holding bible studies for teammates and their wives during the week before a game.