Centennial Slate for Class of 2020 Revealed 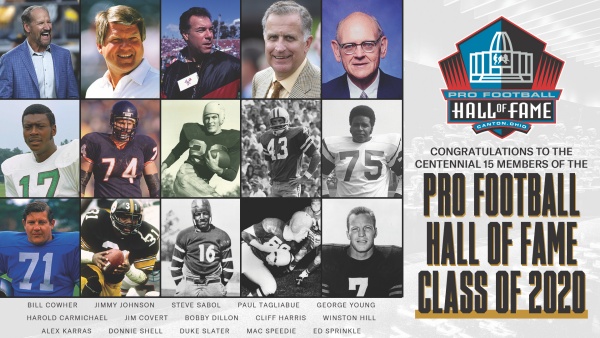 The full 15-person Centennial Slate for the Class of 2020 was revealed live today on NFL Network’s “Good Morning Football.” The special slate of enshrinees consisting of 10 Seniors (players who last played more than 25 years ago), three Contributors (an individual other than a player or coach) and two Coaches were elected by a special Blue-Ribbon Panel during a meeting at the Hall of Fame last week. It marked the first time in history that a group of enshrinees was selected during a meeting held at the Pro Football Hall of Fame.

The two coaches, BILL COWHER and JIMMY JOHNSON, were surprised by Hall of Fame President & CEO David Baker, who informed them of their election on their respective studio shows during last weekend’s NFL divisional playoff games.

The Centennial Slate of Enshrinees will be joined in the Class of 2020 by five Modern-Era Players who will be elected on “Selection Saturday,” the day before Super LIV in Miami. Those five individuals will be revealed and join the members of the Centennial Slate on NFL Honors, a two-hour primetime awards special to air nationally on the eve of Super Bowl LIV at 8 p.m. ET on FOX. Details and ticket information for the annual Enshrinement Ceremony and the Centennial Celebration will be revealed in the coming weeks.

The Centennial Slate Blue-Ribbon Panel was comprised of many members of the overall Selection Committee in addition to Hall of Famers, coaches, football executives and several leading historians. The panel considered nearly 300 nominees in the lengthy process to elect the slate.

“This was the most thorough vetting of candidates in the Hall’s history and it needed to be. Our charge was to scour 100 years of professional football and find the most deserving candidates who have slipped through the cracks,” commented veteran Hall of Fame Selector Rick Gosselin. “All 38 finalists for the Centennial Slate were Hall of Fame worthy but we could only choose 15. I am proud to be a part of this process that honors these men who shaped the NFL in its first century."

Joins his father Ed Sabol as only third father-son duo to be elected to Pro Football Hall of Fame (Art and Dan Rooney; Tim and Wellington Mara are the others) … Began brilliant career in 1964 as cinematographer working for his father who founded NFL Films … Artistic vision behind studio that completely revolutionized how fans watched the National Football League … Under his leadership, NFL Films won over 100 Emmys … Personally, won 35 Emmys in more categories than any other person in TV history (writing, cinematography, editing, directing and producing) … He and his father received the Lifetime Achievement Emmy from the National Academy of Television Arts and Sciences, 2003 … Named the 2002 Sports Executive of the Year by Sporting News … Honored by Pro Football Hall of Fame as winner of prestigious Pioneer Award for significant innovative contributions to pro football, 2007 … Bestowed March of Dimes Sports Leadership Award, 2010 … Inducted into Philadelphia Sports Hall of Fame and Sports Broadcasting Hall of Fame, 2011 … Received Sports Business Journal’s Champions – Pioneers & Innovators in Sports Business award, 2012.

During tenure, NFL grew to unparalleled heights during his 17-year reign after succeeding Pete Rozelle as league Commissioner ... By a wide margin, the NFL with its competitive equality is considered nation’s most popular sport ... Committed to a “league think” philosophy, his leadership enabled NFL to address several key priorities ... The league expanded to 32 teams ... Nearly two decades of labor peace with the NFL Players Association ...  League supported some 20 new stadium construction projects ... Established NFL as a global brand with operations in overseas markets ... Was first league to operate on a weekly basis on two separate continents ... Created a league-wide internet network and subscriber-based NFL TV Network ...  Secured largest TV contracts in entertainment history totaling $25 billion ... Before becoming league’s CEO, represented NFL as attorney ... Served in office of U.S. Secretary of Defense as policy analyst.

Little All-America and All-East honors as a defensive tackle at Bucknell … General manager of Giants, rebuilt team by drafting key players such as Phil Simms and Lawrence Taylor … Hired Bill Parcells as head coach … During tenure, Giants earned eight playoff berths, and victories in Super Bowls XXI, XXV … Prior to Young’s arrival, Giants had not made playoffs since 1963 … Was named NFL Executive of the Year unprecedented five times, 1984, 1986, 1990, 1993, 1997 … Following 1997 season, joined NFL front office as executive vice president of football operations … Served as Chairman of NFL Competition Committee … Prior to joining Giants was on staff of Baltimore Colts (1968-1974) as scout, offensive line coach, director of player personnel, offensive coordinator … With Miami Dolphins (1975-78) was director of personnel and pro scouting.

Drafted in first round after being voted college football’s outstanding lineman in 1957 … Dominant defensive tackle of his era who utilized variety of moves to elude opponent blockers …  Durability evidenced by him missing just one game in 12-year career … Lions team leader for years … Started 153 consecutive games … Led a Detroit defense that finished second in points allowed in the NFL three times that resulted in best win-loss records during his career (11-3 in 1962, 9-4-1 in 1969 and 10-4-0 in 1970 ... Capped career with his lone playoff appearance, 1970 … Recorded four interceptions, 17 fumble recoveries and one safety … Selected First-Team All-Pro four times (1960-62, 1965) … Second-Team All-Pro eight times … Voted to four Pro Bowls (1961-63, 1966) … Named to the NFL’s All-Decade Team of the 1960s.

An All-American tackle at Iowa and one of the school’s most heralded athletes … African-American pioneer in early years of the National Football League … Starred as two-way lineman for 10 seasons … Longest-tenured African-American player during era … Blocked for numerous Hall of Famers – Fritz Pollard, Jimmy Conzelman, Jim Thorpe and Ernie Nevers … Graduated from law school while playing in the NFL … Played full 60 minutes during historic game when Nevers scored single-game record 40 points, Thanksgiving Day 1929 … Scored touchdown on interception return vs. Orange Tornadoes, Dec. 8, 1929 … Named All-NFL four times (1923, 1925, 1926, 1929) … Also named Second Team All-NFL by various outlets in seven of his 10 pro seasons (1923, 1924, 1925, 1926, 1927, 1929, and 1930) …  Racial bias presumedly kept him from being named to official All-Decade Team of 1920s … Recognized as All-Decade players in 1920s in the book “The Pro Football Chronicle” … Elected to College Football Hall of Fame, 1951.

Drafted by Lions but enlisted in Army instead of pursuing pro football career … Joined Cleveland Browns in new All-America Football Conference as defensive end … Quickly converted to offensive side of ball and created lethal receiving duo with Hall of Famer Dante Lavelli … Member of Browns team that finished first every season of his career … Took screen pass from Otto Graham and raced record 99 yards for TD vs. Buffalo, 1947 … Established every major receiving record in four-year history of AAFC … Led AAFC in receptions three times (1947-49) and NFL once (1952) … Leader in receiving yardage twice in AAFC (1947, 1949) when he eclipsed 1,000-yard plateau in each of those seasons … Career stats: 349 receptions for 5,602 yards and 33 TD … Played in six league championship games (four in AAFC, two in NFL) … All-Pro three times … All-AAFC four times … All-NFL twice … Member of the NFL’s All-Decade Team of 1940s. 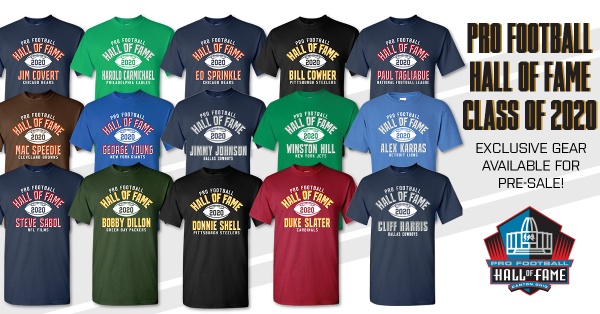 Exclusive Pro Football Hall of Fame gear for each of the 15-members of the Centennial Slate are available now. Fans can now purchase special t-shirts and hats at https://www.profootballhof.com/store/class-of-2020/

The Knock Becomes the Walk On

Since 2016, David Baker has been “Knocking on the Door” of each new class. Now, the knock has become the live “Walk On” in, a national must-see TV magical moment.

The Pittsburgh Steelers are a likely candidate to play in the NFL's 2020 Hall of Fame game.