The Best NFL Draft-Day Trades of All Time 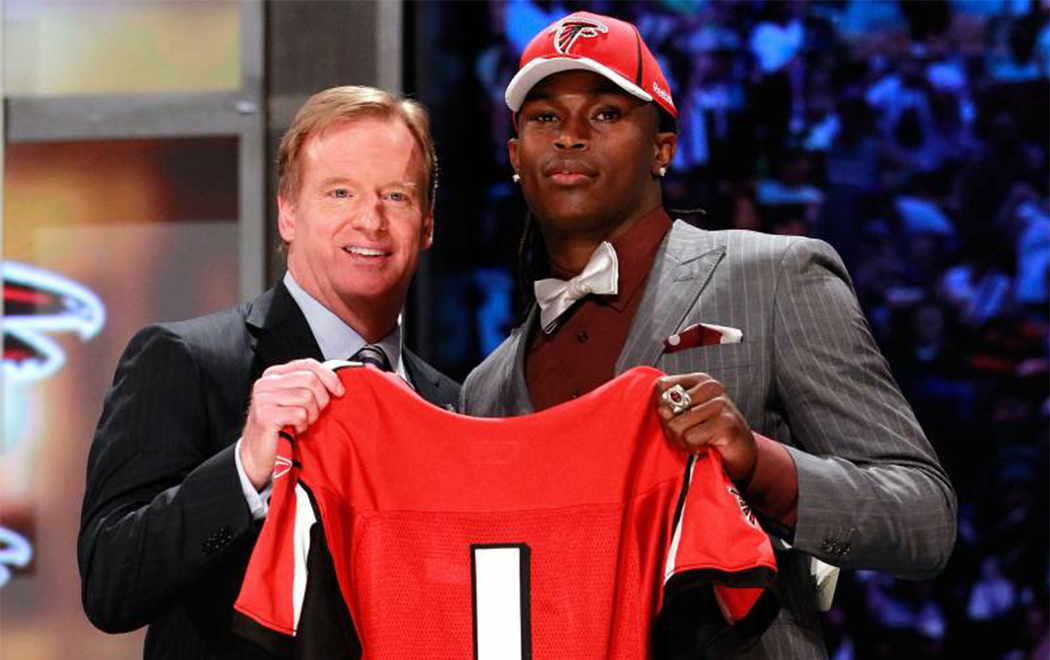 No matter how you may feel about the modern evolution of the National Football League, there's no denying it has become a year-round sport. This week's draft might just be the most hyped event of the season—though a certain show about dragons and dead armies is definitely up there.

The beauty of the NFL draft, though, is it's drenched in drama with no scripting required. The pure unpredictability of the draft ensures that the simple selection of future NFL players is must-see television.

The possibility of draft-day trades hovers over the event, and the frequency of them is why most mock drafts can be thrown out the window minutes into opening night. Last year, for example, 16 of the first 32 picks were made by teams that didn't originally own the selections.

Of course, while draft-day trades are exciting, not all are ultimately successful. Here, you'll find some that definitely were—at least for one team involved—ranked according to factors like value, player performance and the overall payoff for the team.

Honorable Mentions: Chiefs and Texans Trade for Their Franchise Quarterbacks 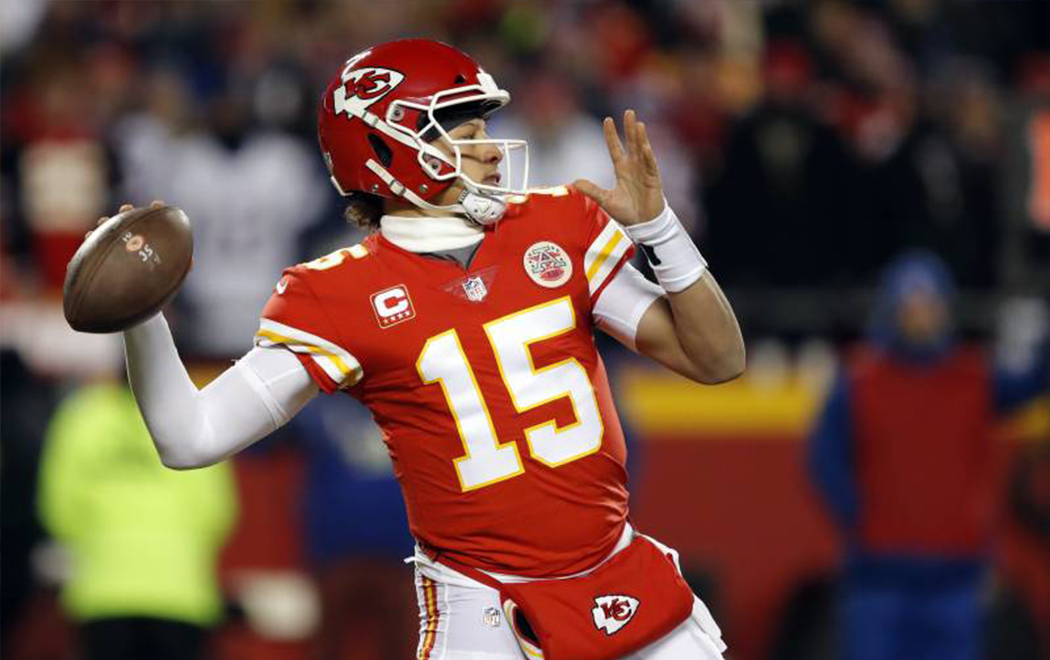 The Houston Texans and Kansas City Chiefs traded up to secure their new franchise quarterbacks in the 2017 draft. They're paired together here because it's difficult to separate the two moves this early in each player's career. The recency of the trades is why they're at the bottom of this list—let's revisit at the end of their rookie deals.

Both appear to be on their way to being legitimate franchise quarterbacks. Both were named to the Pro Bowl this past season, and Mahomes was named league MVP.

It's worth noting that the Chicago Bears traded up in the same draft to land North Carolina's Mitchell Trubisky. While Trubisky was also a Pro Bowler in 2018, Chicago gave up a third-round pick, a fourth-round pick and a 2018 third-round pick to move up from third overall to second overall. The Bears almost certainly could have stayed at No. 3 and gotten Trubisky, so the trade itself wasn't as savvy as the deals for Mahomes and Watson. 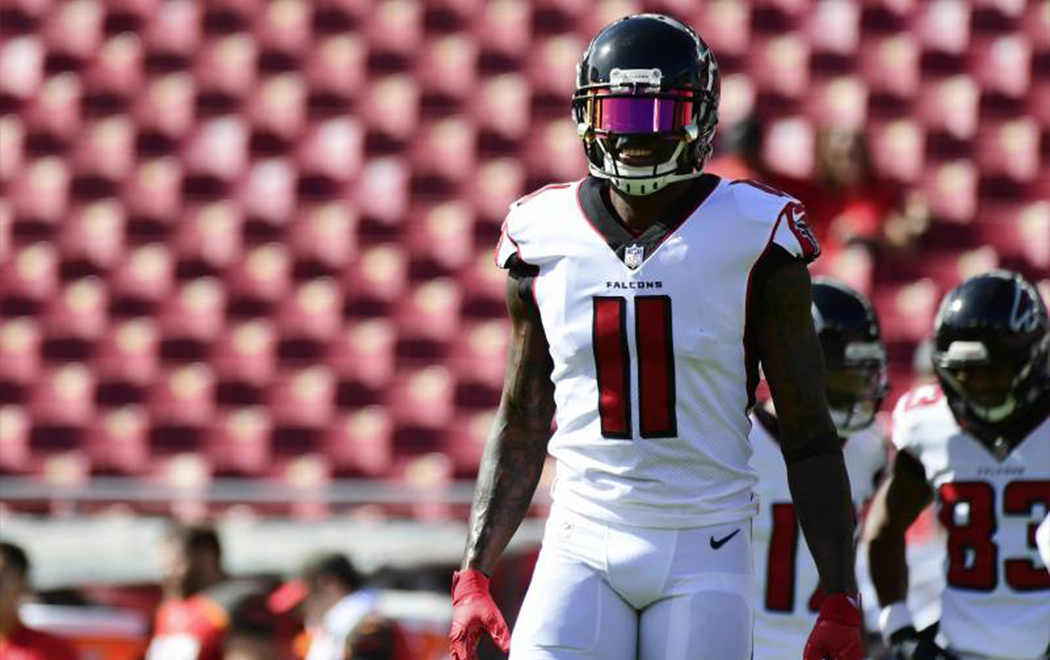 However, the move got Atlanta from 27th overall to pick No. 6, and the Alabama product has been repaying Atlanta ever since.

Jones is most likely a Hall of Famer. He's a six-time Pro Bowler and four-time All-Pro. He's already amassed 698 receptions and 10,731 yards receiving and only recently turned 30. There's also a chance he plays his entire career in Atlanta. He's on the verge of earning a new deal, and money isn't his top priority.

"I don't really care about as far as being the highest-paid receiver, man," Jones said, per Vaughn McClure of ESPN.com. "It's a number."

The Falcons certainly didn't steal Jones, but trading to get him landed the franchise one of its best all-time players. 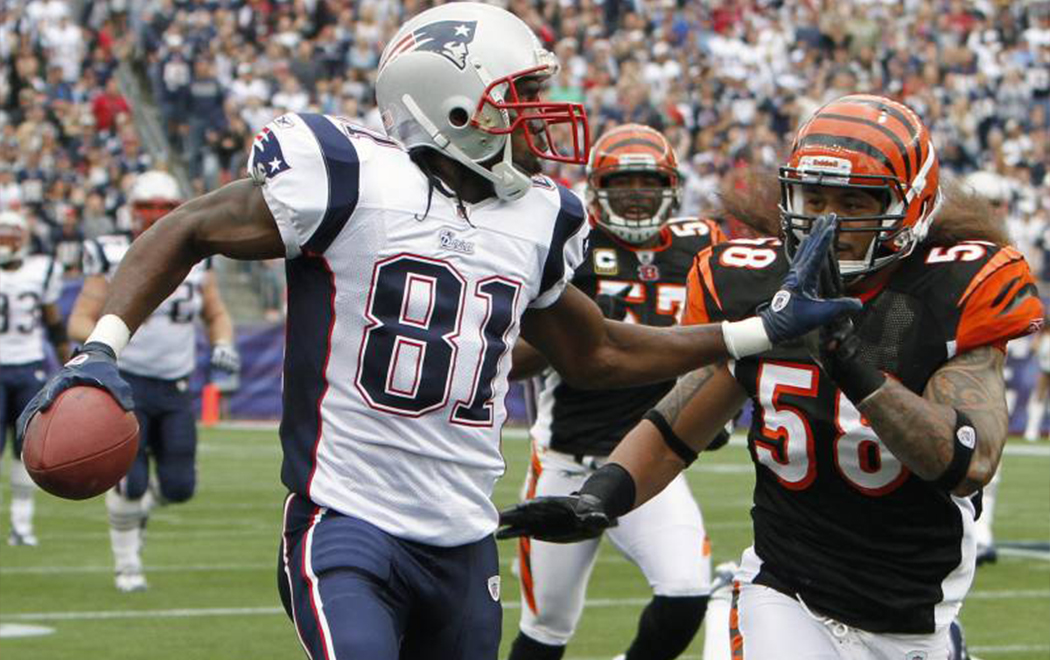 Randy Moss is in the Hall of Fame. The New England Patriots acquired him for a fourth-round pick on the final day of the 2007 draft. The move makes this list on sheer value alone.

Moss immediately rewarded New England for taking a chance on him. During the 2007 season, he racked up 1,493 yards and an NFL-record 23 receiving touchdowns. He also helped the Patriots go 16-0 and reach the Super Bowl, where they eventually lost to the New York Giants.

In all, Moss had three 1,000-yard seasons for New England. The trade to acquire him would probably rank higher if he hadn't fallen off in his fourth season as a Patriot and gotten himself traded to the Minnesota Vikings—ironically the team that drafted him in 1998. It might also rank higher if Moss had actually helped deliver a Lombardi Trophy.

Still, there's no reason to sneeze at a trade that turned a fourth-round pick into an All-Pro receiver with a record-setting season and legitimate opportunity to win the big one. 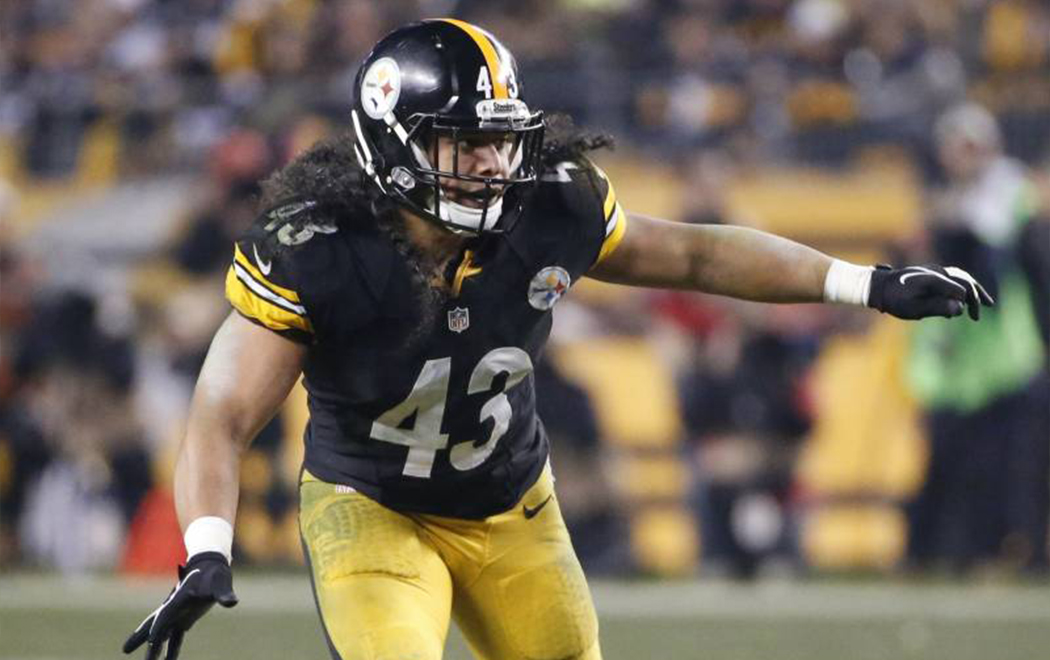 Longtime Pittsburgh Steelers safety Troy Polamalu is the first of two standout members of the franchise on this list, and no one would blame you for flipping them in the rankings.

Polamalu spent all 12 years of his career with the Steelers and finished with 770 tackles, 32 interceptions, eight Pro Bowl selections and six All-Pro nods. He also helped Pittsburgh win its fifth and sixth Lombardi Trophies after the 2005 and 2008 seasons.

The Steelers did have to trade up to land the former USC star in the 2003 draft, but they didn't give up a whole lot. They sent third- and sixth-round selections to the Chiefs to move up from 27th overall to pick No. 16.

Pittsburgh used that 16th pick on Polamalu, who then served as the ultimate linebacker-safety hybrid and as the tone-setter for the Steelers defense for more than a decade. 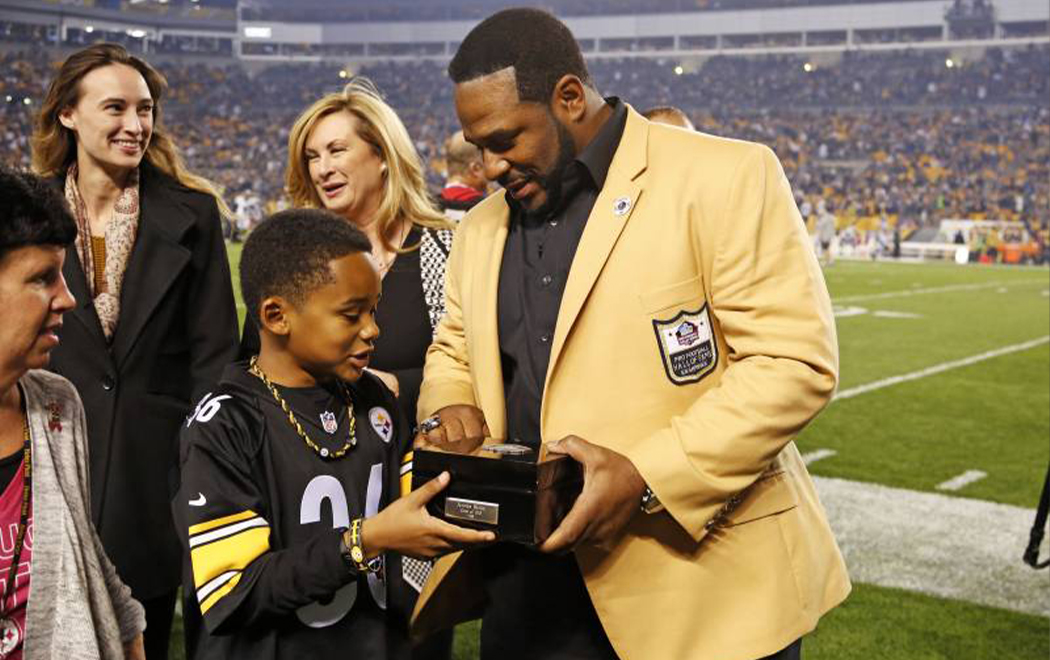 Troy Polamalu will probably end up in the Pro Football Hall of Fame—he'll be eligible in 2020—but former Steelers running back Jerome Bettis already is.

While Bettis is best known as a Steeler, he was drafted by the Los Angeles Rams 10th overall in 1993. But after just three seasons in L.A., Pittsburgh surrendered a second-round pick during the 1996 draft, plus a 1997 fourth-rounder in exchange for Bettis and a third-round pick.

Bettis went on to play 10 seasons for the Steelers. He was named to four Pro Bowls with the franchise and helped Pittsburgh win Super Bowl XL. He racked up 13,662 yards rushing during his career, more than 10,000 of which came with the Steelers.

Considering it barely cost Pittsburgh a second-round pick to land Bettis, this proved to be a great draft-day trade. 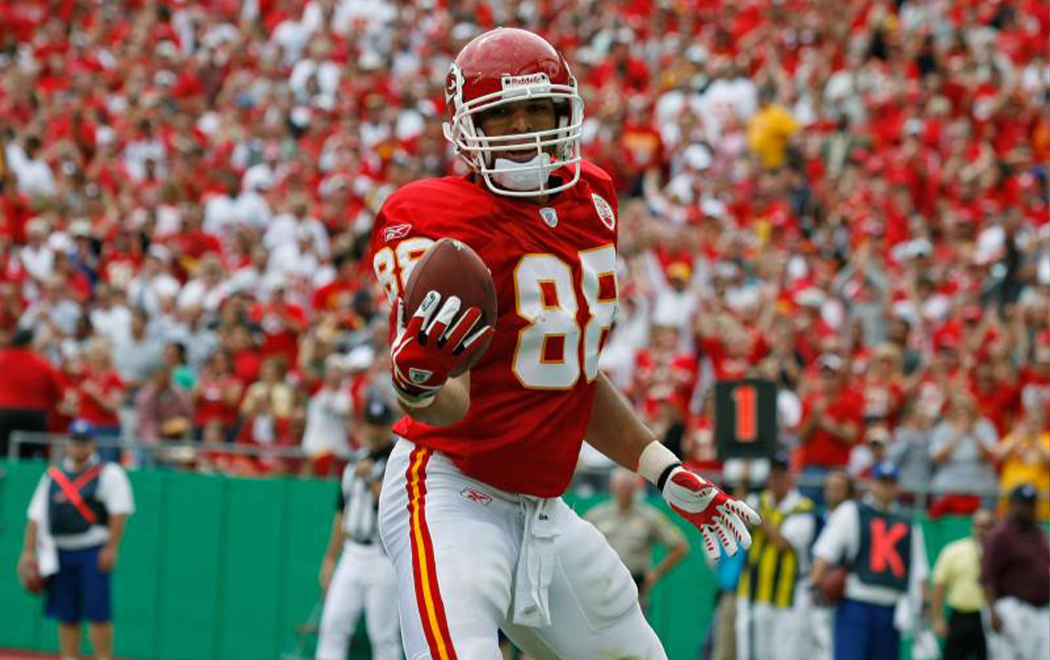 From Ozzie Newsome and Kellen Winslow to Rob Gronkowski and Antonio Gates, the NFL has seen some position-defining tight ends over the years. However, Chiefs legend Tony Gonzalez is arguably the stick by which all modern receiving tight ends are measured.

Gonzalez amassed more than 15,000 receiving yards and 1,325 receptions during his time with the Chiefs and Falcons. He was also named to 10 All-Pro teams and was a 14-time Pro Bowl selection. Unsurprisingly, this culminated in a first-ballot selection to the Pro Football Hall of Fame.

Kansas City landed the former Cal basketball standout after making a draft-day trade that looks quite favorable in retrospect. The Chiefs sent third- and sixth-round picks to the Tennessee Oilers in the 1997 draft to move up from 18th overall to 13th overall. They also swapped picks in the fourth round.

While Gonzalez didn't help deliver a championship like some of the other players on this list, he was the kind of pass-catching master whom today's tight ends still strive to emulate. 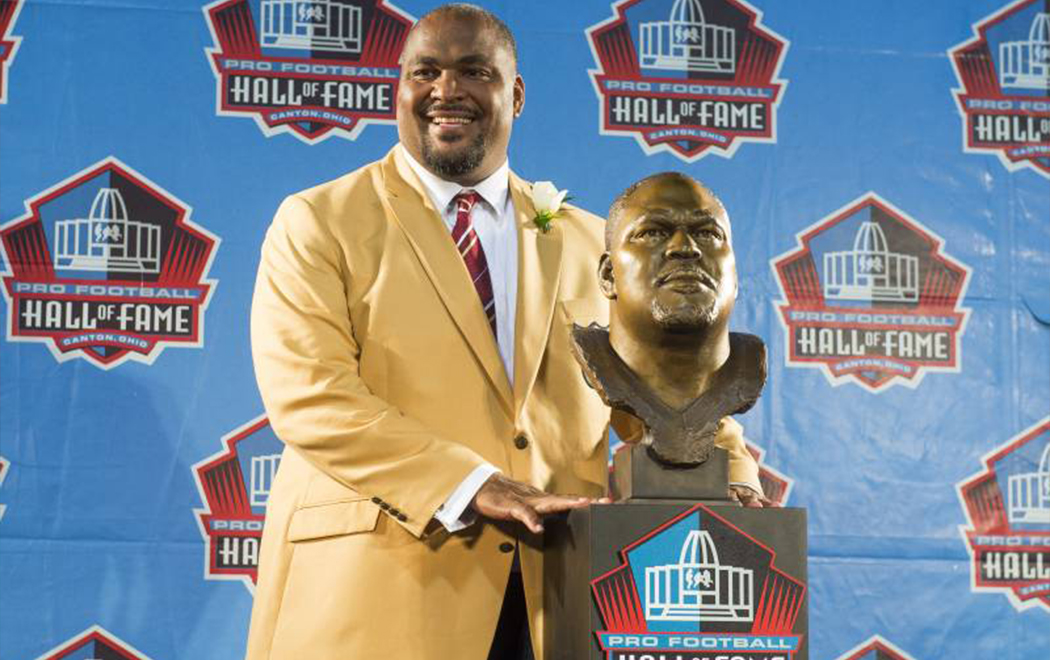 During his time with the Seattle Seahawks, Walter Jones was a bad, bad man. The Seahawks couldn't have known it when they traded a third-round pick to the Tampa Bay Buccaneers to move up from 12th overall to sixth. However, the former Florida State star went on to become one of the best offensive tackles in modern history and a first-ballot Hall of Famer.

Jones manned the left tackle spot in Seattle for 12 seasons, starting every game in which he appeared. He was the original iron-man left tackle, long before Joe Thomas took over the mantle 10 years after Jones was drafted.

"I've tried to watch him since I got here and emulate what he does," former Seahawks tackle Sean Locklear said in 2007, per Greg Bishop of the Seattle Times. "You can't. It's not textbook. It's just Walter." 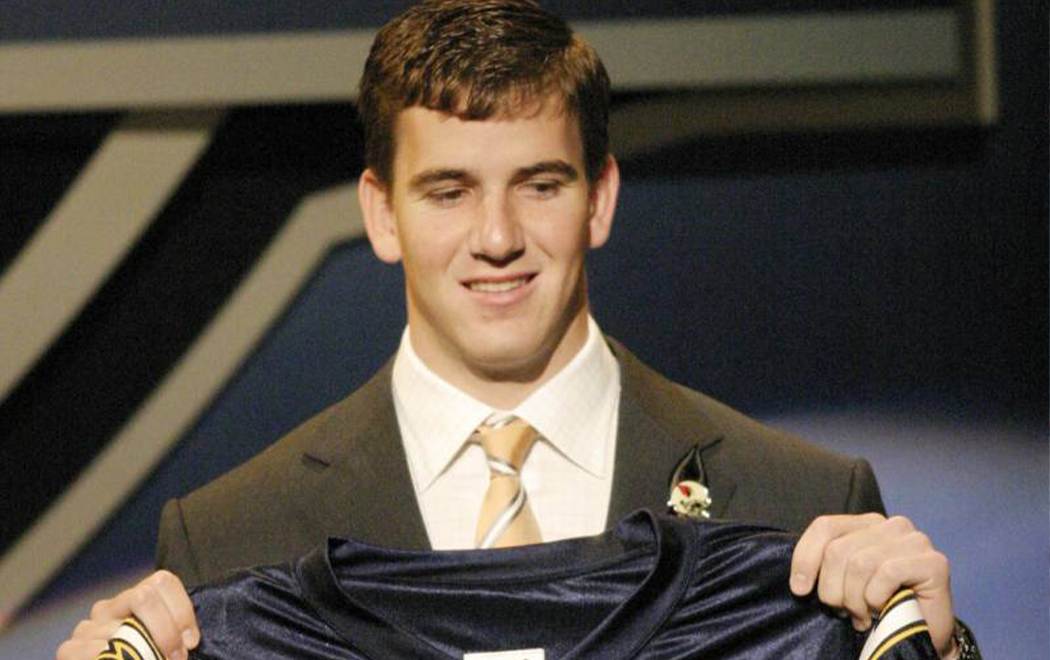 Draft-day trades don't usually work out for both parties involved. However, the 2004 trade that sent Eli Manning to the Giants and Philip Rivers to the San Diego Chargers did—at least eventually.

See, the Chargers—now in Los Angeles, obviously—took Mississippi's Manning first overall despite knowing he didn't want to play in San Diego. The Giants then took NC State's Rivers with the fourth overall selection. New York soon sent Rivers, a third-round selection and 2005 first- and fifth-round picks to the Chargers for Manning.

Both teams ended up with franchise signal-callers and potential Hall of Famers. Manning helped deliver two Super Bowls to the Giants, capturing MVP awards in each, and while Rivers hasn't won a title, he's an eight-time Pro Bowler who ranks eighth on the all-time passing yards list (right behind manning).

As for getting a draft haul in exchange for a quarterback who didn't want to play in San Diego?

"[The trade] was the most satisfying moment for me in my career and I really mean that," former Chargers general manager A.J. Smith said, per Adam Stites of SB Nation. 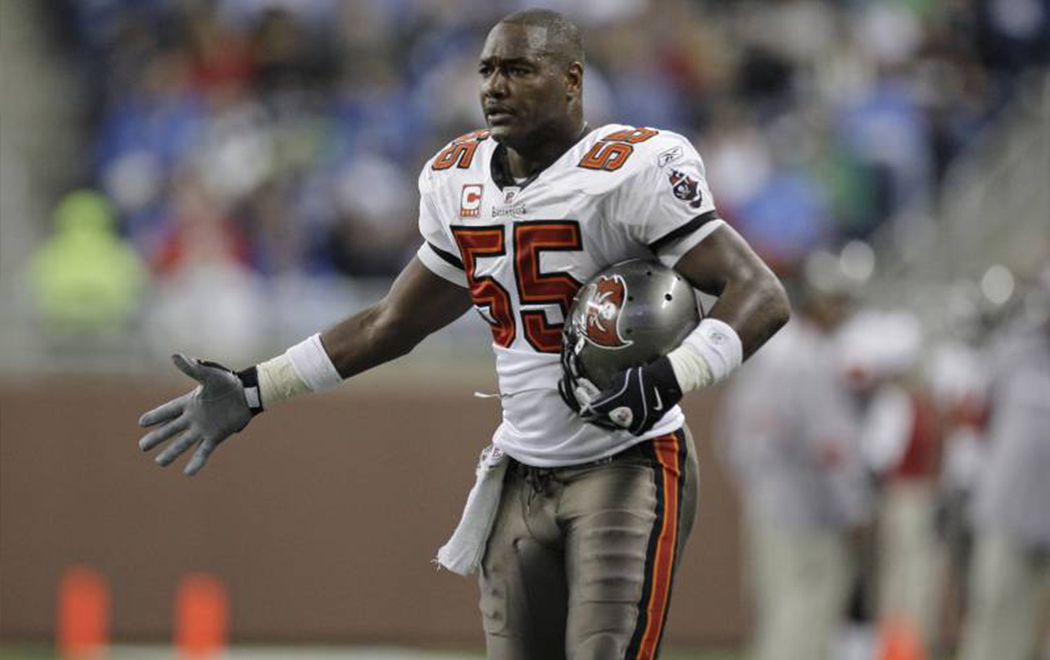 The Tampa Bay Buccaneers made a series of brilliant trades during the 1995 draft that led to landing two first-ballot Hall of Famers.

First, Tampa traded down from seventh overall so that the Philadelphia Eagles could select former Boston College defensive end Mike Mamula. The move for Mamula could be considered one of the worst draft-day trades in recent memory, but it worked out great for the Buccaneers. They got a pair of second-round picks in return.

Tampa then traded one of those second-round picks along with its own second-rounder to jump back into the first round and select Florida State linebacker Derrick Brooks 28th overall.

All Brooks did was go on to make 11 Pro Bowls, rack up 1,715 career tackles, make nine All-Pro teams and help deliver a Lombardi Trophy after the 2002 season. He also played his entire 14-year career with the Buccaneers, making him a true franchise legend.

Oh, and the 12th overall selection the Buccaneers ended up with after trading with Philadelphia? It was used on Miami defensive tackle Warren Sapp. 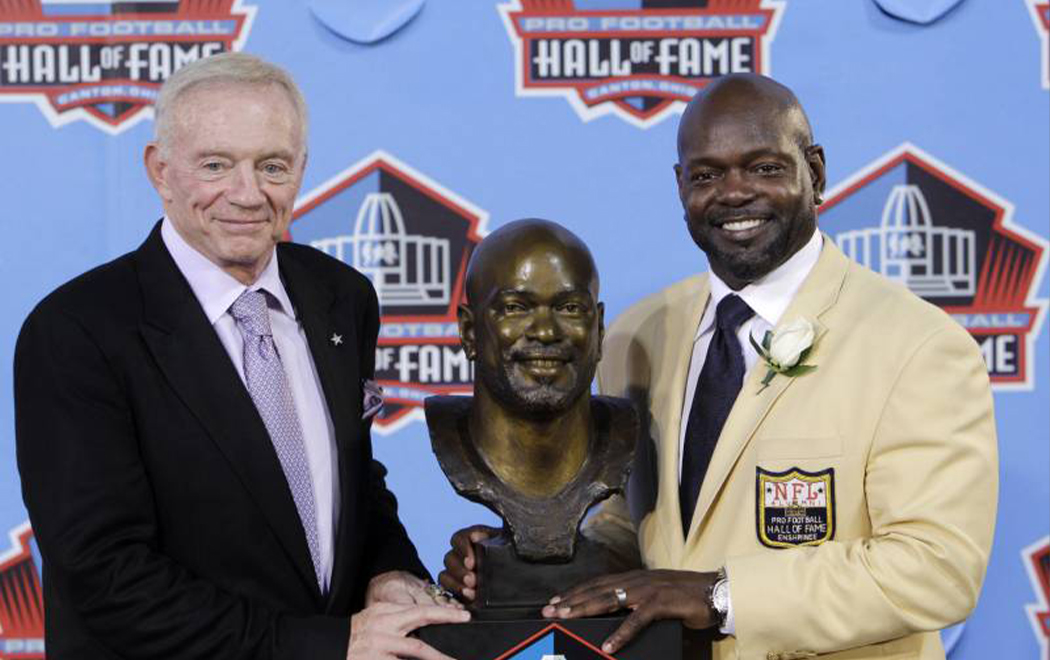 Like the next entry on this list, Dallas Cowboys legend Emmitt Smith is one of the greatest players of the modern era. He's the reigning career rushing leader with 18,355 yards, produced a record 164 rushing touchdowns and was named to the Pro Bowl eight times.

More importantly, the Florida product was one of the Triplets, along with quarterback Troy Aikman and wideout Michael Irvin, who helped deliver Super Bowl victories in the 1992, 1993 and 1995 seasons.

Smith landed with the Cowboys only after Dallas pulled off a draft-day trade to secure him. It sent a third-round pick to the Steelers to move up from the 21st overall pick to the 17th overall pick.

While Smith failed to reach 1,000 yards as a rookie, he topped that mark in each of the next 11 seasons. He played 13 seasons altogether for Dallas and led the league in rushing four times during that span. A first-ballot Hall of Famer, Smith was certainly worth giving up an additional third-round pick to draft. 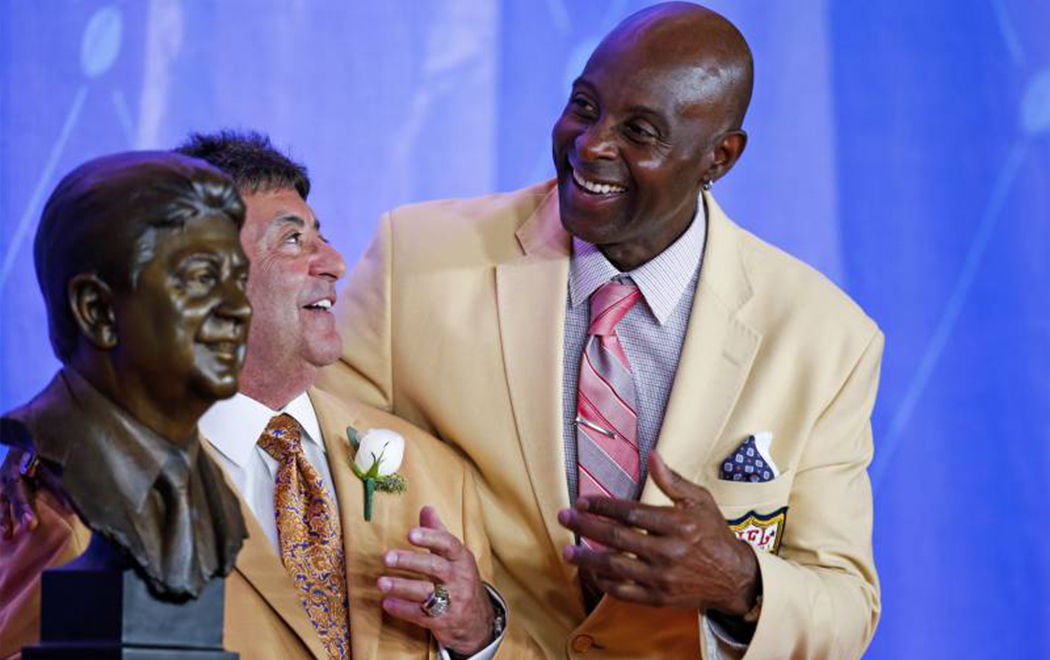 The trade that sent wide receiver Jerry Rice to the San Francisco 49ers isn't just one of the best draft-day trades in league history; it's one of the most impactful trades of any sort in the history of the league itself.

Rice, after all, is widely considered one of the best players at any position to ever step onto the gridiron. He's a three-time Super Bowl champion, 11-time All-Pro, Super Bowl MVP and holds records for receptions (1,549), receiving yards (22,895), receiving touchdowns (197) and all-purpose yards (23,546).

If not for a draft-day trade in 1985, though, Rice may never have become a 49ers legend.

San Francisco head coach Bill Walsh fell in love with the Mississippi Valley State receiver before the draft and moved up from 28th overall to the 16th pick to get him. The 49ers sent second- and third-round picks to the Patriots to make the move and also got New England's third-round pick in return.

Essentially, San Francisco gave up a second-round pick to move up 12 spots in Round 1 and nine spots in Round 3. That's tremendous value in and of itself. When you add in the fact that Walsh turned the top pick into perhaps the best player of the modern era, it's nearly impossible to argue any other draft-day trade as the absolute best.

Lamar Jackson to be cover athlete for Madden 21

Baltimore Ravens quarterback Lamar Jackson has announced that he’ll be the cover athlete for the new Madden 21 video game.

The NFL, through its Inspire Change platform and the Players Coalition, today announced a donation of $3,050,000 to seven markets that have been significantly impacted by COVID-19.