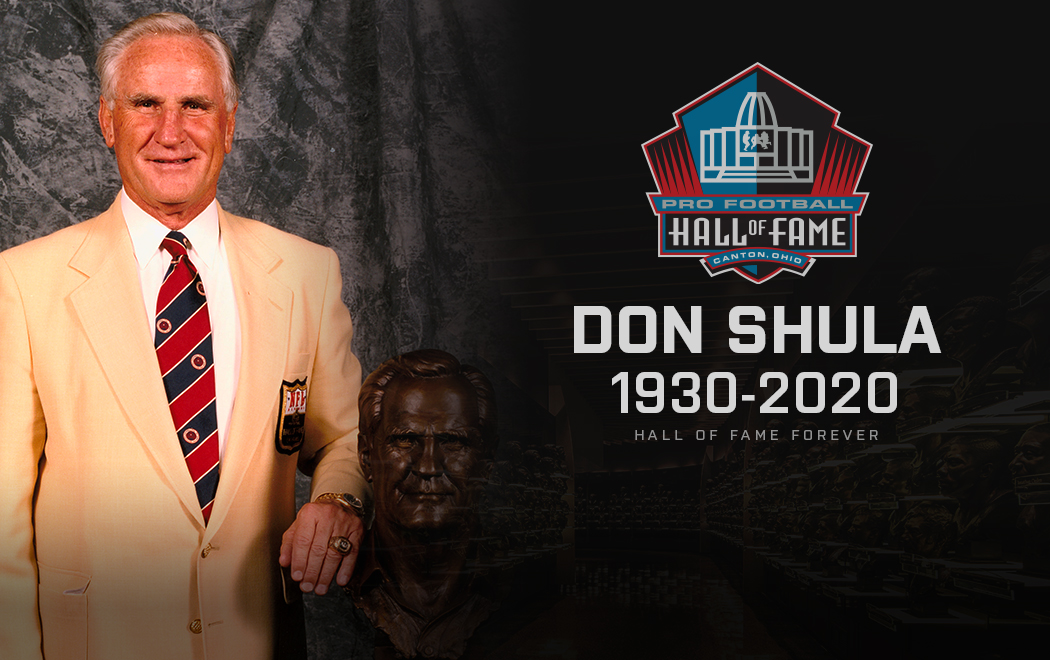 Don Shula, the winningest coach in NFL history and the only NFL coach of an undefeated season has passed away at age 90.

Shula was born to parents of Hungarian descent in Grand River, Ohio, a small town on the shores of Lake Erie. He attended Harvey High School in Painesville, Ohio where he played football after forging his parents’ signatures after they forbid him to play.

He attended John Carroll University, was drafted by the Cleveland Browns in 1951 after coaching for one year at Lincoln High School in Canton, Ohio. He played seven years in the NFL, two with Cleveland, four years with the Baltimore Colts, then a final year in 1957 with the Washington Redskins.

At age 33, he became the youngest ever NFL head coach by taking the reigns of the Baltimore Colts in 1963. He led them to seven straight winning seasons, losing the Cleveland Browns in 1964, winning the NFL championship in 1968 and then losing to the New York Jets in Super Bowl III.

He became the head coach of the Miami Dolphins from 1970 to 1995 and his record is unmatched in NFL history.  In 1995, he concluded his 33rd season as the winningest coach ever with a career mark of 347-173-6 .  Of all NFL coaches, only Shula and the George Halas and Bill Belichick have attained 300 career victories.

In 26 years at Miami, Shula’s Dolphins experienced only two seasons below .500.  Shula’s team reached the playoffs 20 times in 33 years and his teams won at least 10 games 21 times.  Shula set a then-NFL record for having coached in six Super Bowls, with his teams winning twice.  In Super Bowl VII, the 1972 Dolphins completed their historic 17-0-0 campaign – the only perfect season in NFL history – with a 14-7 win over the Washington Redskins.  In 1973, Miami defeated the Minnesota Vikings in Super Bowl VIII to culminate a two-season span when the Dolphins won 32 of 34 games.

Shula is honored at Don Shula Stadium at John Carroll University, and the Don Shula Expressway in Miami. An annual college football game between South Florida schools Florida Atlantic University and Florida International University is named the Shula Bowl in his honor. He is the founder of the “Shula’s Steakhouse” chain and is survived by his wife Mary Anne and sons Dave Shula, former NFL head coach, and Mike currently quarterbacks coach of the Denver Broncos and daughters Donna, Sharon and Annie.

“The Game has lost one of the greats today, but we have all lost a truly incredible man. Hall of Fame Coach Don Shula served as an ambassador for this great game for more than half a century. His legendary feats on the gridiron led him to a record 347 wins to become the winningest coach in NFL history and allowed him to lead the 1972 Dolphins to the only perfect season in NFL history.

Coach Shula was a man who truly loved the game and I have often been moved by the deep respect and affection he was always afforded by the men who played for him.

The entire Pro Football Hall of Fame family mourns the passing of Coach Shula. Our thoughts and prayers are with his wife Mary Anne and their entire family. The Hall of Fame flag will fly at half-staff and we will forever keep his legacy alive to serve as inspiration to future generations.”

The Hall of Fame flag on the Museum’s campus will be flown at half-staff in Shula’s memory.

NFL to Schedule all 2020 Games in United States

The​ National Football League announced today that it will schedule all 2020 games in the United States in order for the entire season to be played in NFL teams’ stadiums under consistent protocols focused on the well-being of players, personnel and fans.

The NFL regular season could have a dramatically different look in 2020.