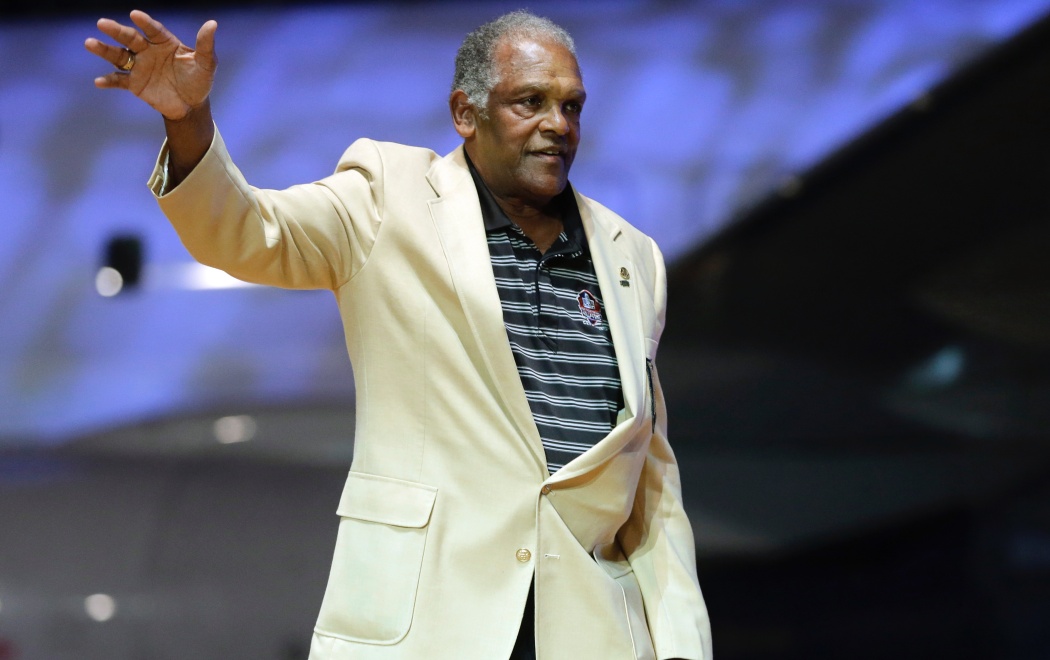 For Lenny Moore, it was easy to choose who would present him at his induction into the Pro Football Hall of Fame.

"I picked the only logical person," Moore wrote in his 2005 autobiography titled "All Things Being Equal." "I couldn't think of anything more fitting than for me to receive this award from the man who who had given me the confidence to seek a college education and a football career."

That man was Andy Stopper, the legendary Reading High football and track coach who Moore has described as one of his first mentors.

Stopper provided strength on Aug. 2, 1975, which was a bittersweet day for Moore and voted by Reading Eagle readers as the sixth greatest moment in Berks County sports history.

Erma Moore, Lenny's second wife, had been diagnosed with colon cancer a year earlier. The Moore family wasn't certain she would be able to attend the induction in Canton, Ohio, but she did make it, accompanied by nurses and medical equipment.

Moments before the ceremony, Stopper offered Moore a Biblical passage from the Book of Isaiah: "But that they have hope in the Lord shall renew their strength they shall take wings as eagles, they shall run and not be weary, they shall walk and not faint."

"Those were powerful words for me to hear given Erma's failing strength," Moore wrote in his book.

When it came time for him to speak, Moore lost his composure while describing how happy his wife and his children were at his honor.

"You've made my kids proud," Moore said sobbing. "My wife is a very proud woman and you've made me very proud."

Moore, now 86, made Reading and Berks County proud, first as a star for the Red Knights and then at Penn State before embarking on a 12-year career (1956-67) in the NFL, all with the Baltimore Colts.

He scored 113 touchdowns, now 16th in NFL history; gained 12,451 all-purpose yards; played in seven Pro Bowls; received All-Pro honors five times; and was named last year as one of the top 100 players and one of the 12 greatest running backs in NFL history.

"Lenny might have been one of the best who's ever played the game," former Colts coach Don Shula, who died this year, told the Eagle in 2003. "I don't think he's ever gotten the recognition. When they talk about the other great backs (in NFL history), he's right there in their league.

"When we used him as a flanker, he was as good or better than anybody out there. He made some great catches."

Moore, who the Colts drafted ninth overall in 1956, began his pro career as a running back. He averaged 7.5 yards a carry and was named Rookie of the Year.

Moore stood out in the Colts' overtime win over the New York Giants in the 1958 championship game at Yankee Stadium, often called the greatest game ever played. He caught six passes for 101 yards and carried eight times for 24 yards despite suffering a chest injury in the second quarter.

The following year, the Colts beat the Giants again, with Moore catching three passes for 126 yards and a score.

He missed most of the 1963 season after he was kicked in the head. He came back the following year with a vengeance, running for 584 yards and 16 touchdowns and catching 21 passes for 472 yards and three scores. He was voted the league MVP by the players.

"It was probably the highest award I received as a player," Moore said in 2003. "I know the sacrifices I had to make to make it a reality."

He scored touchdowns in 18 consecutive games from 1963-65, a record that stood until LaDainian Tomlinson broke it in 2005. He retired after the 1967 season and spent a large part of his life working to improve the lives of troubled and at-risk teens and children.

"He was the best football player I've ever been around," said former Penn State coach Joe Paterno, who died in 2012.

Paterno was an assistant coach during Moore's college career and helped recruit him after watching grainy film of him at Reading High.

"I saw Lenny score five touchdowns in that much mud," Paterno said in 2003, spreading his hands about 3 inches apart. "Honest to God, it was like Lenny was walking on water. Oh, God, was he good. He would have been a great ballet dancer."

Moore led the Nittany Lions in rushing each of his three varsity seasons. He enjoyed his best year as a junior in 1954, when he finished second in the country in rushing with 1,082 yards and averaged 8.0 yards a carry.

Moore finished his career as the Lions' all-time leader in rushing yards (2,380), 100-yard games (12) and all-purpose yards (3,543). Moore also played in the secondary when two-way football was the rule and made 10 interceptions.

He also earned his nicknamed "Spats" at Penn State, where he began using white tape on his black, low-cut shoes instead of wearing high-top shoes that were issued to all the players.

"He set the style pattern on campus," Paterno said. "Some guys, they don't try to hide anything. He wasn't a phony. Lenny was Lenny."

Moore graduated in 1952 from Reading High, where he was known as "The Reading Rocket" and "Lightning Lenny" because of his explosive speed.

"If I told you how good Lenny Moore is, you wouldn't believe me," Stopper said at the Hall of Fame induction ceremonies, "I mean, good at football, at citizenship and caring for others."

Moore has had conflicting memories of that afternoon in 1975 in Canton. He was proud of of being in the Hall of Fame and thrilled that his father was able to be there. But he was sad that his mother, who had died, wasn't there, and couldn't stop worrying about how his wife, Erma, was suffering. She died two months later.

"With all these competing thoughts playing tug of war with my emotions," he wrote in his book, "the Hall of Fame achievement was a bittersweet moment that I'll never forget."

Shields will serve as the honorary chairman for a July 30 virtual gala.