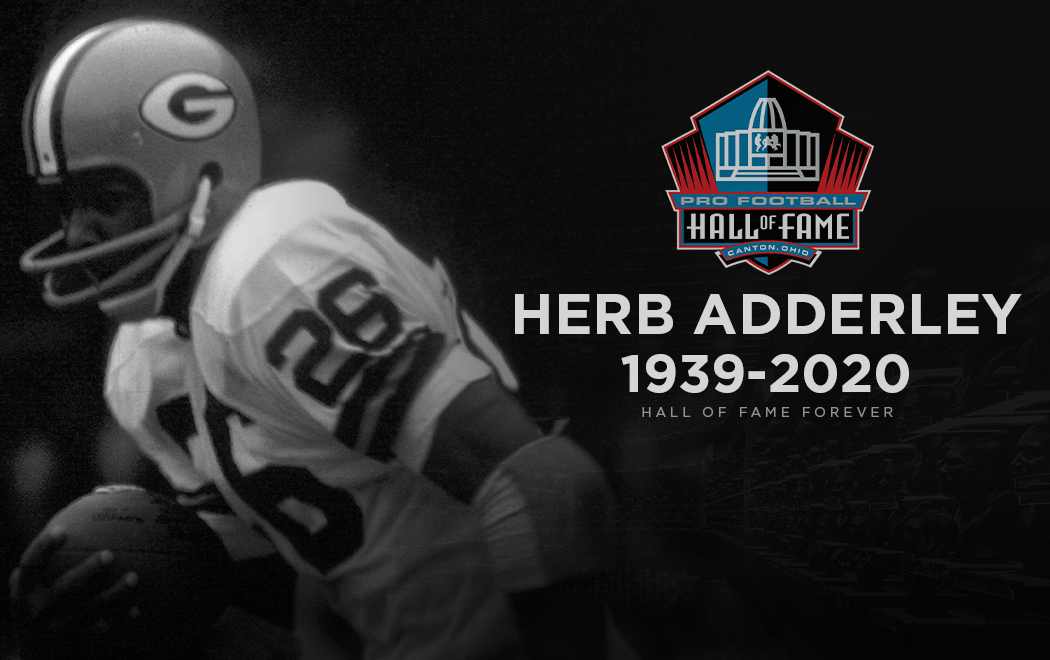 The professional football world today is celebrating the life and mourning the death of Herb Adderley, a member of six championship teams with two storied franchises and a player whose teammates and opponents described as the game’s greatest cornerback.

A member of the Pro Football Hall of Fame’s Class of 1980, Adderley died Friday. He was 81.

“The entire Pro Football Hall of Fame family mourns the passing of Herb Adderley. He was a great player and an even greater man. Herb left an indelible mark on the Game and was respected tremendously by players and personnel across the league.

Our thoughts and prayers are with Herb’s wife, Brenda, and their entire family. We will forever keep his legacy alive to serve as inspiration for future generations. The Hall of Fame flag will be flown at half-staff in Herb’s memory.”

The entire Pro Football HOF family mourns the passing of Herb Adderley. He was a great player and an even greater man. Herb left an indelible mark on the Game and was respected tremendously by players and personnel across the league.#HOFForever | @packers | @dallascowboys pic.twitter.com/wvLqvnlA40

Adderley was drafted in both the National Football League – No. 12 overall by the Packers – and in the American Football League as the No. 10 overall pick of the New York Titans in 1961 following his collegiate career as a running back at Michigan State.

He chose the NFL and the Packers, but upon arriving in Green Bay found himself stuck behind two future Hall of Famers, Jim Taylor and Paul Horning, for a starting role or even significant playing time.

During the Thanksgiving Day game against Detroit, starting cornerback Hank Gremminger went down with an injury. Pressed with the need to find an emergency replacement, coach Vince Lombardi looked to the athletic Adderley, who was one of the team’s top special teams performers.

Adderley stepped in, and his only interception of the season helped Green Bay rally for 10 fourth-quarter points and a 17-9 victory. A few weeks later, the Packers concluded a 12-3 championship season with a 37-0 conquest of the New York Giants in the NFL title game.

Gremminger returned quickly that season, but the stage was set for years to come. He moved to safety for the 1962 season, and Adderley filled the left cornerback slot for the rest of the decade.

The results were immediate and impressive.

Adderley intercepted seven passes, returning one for a touchdown, as the Packers repeated as NFL champions. He was named first team All-Pro, an accolade he would achieve three more times.

"I was too stubborn to switch him to defense until I had to,” Lombardi would say later.  “Now when I think of what Adderley means to our defense, it scares me to think of how I almost mishandled him.”

Adderley was durable, too, starting every game that season and every other game he played through the 1971 season, his second in Dallas, where he had been traded in 1970.

Adderley played in four of the first six Super Bowls, winning championship rings in three of them. He also played in seven NFL championship games in an 11-year span from 1961 through 1971. His teams – the Packers five times and the Cowboys twice – won every one. His 60-yard interception return for a clinching touchdown for the Packers in Super Bowl II was the only interception return for a touchdown in the first 10 Super Bowls.

Perhaps his most impressive accomplishment: In the Packers’ championship season of 1965, Adderley did not allow a single touchdown reception in the regular season.

“Herb was in a class by himself. I don't have to think about it; he was the best,” Chicago flanker Johnny Morris said, according to a Packers.com tribute to Adderley.

Adderley was a member of the NFL’s All-Decade Team of the 1960s and was selected to play in five Pro Bowls.

Bart Starr, quarterback of the Packers during their dynastic run in the 1960s, called Adderley “the greatest cornerback to ever play the game.”

Following his retirement, Adderley returned to his hometown of Philadelphia to broadcast football games for Temple University and the Philadelphia Eagles. He also coached at Temple and with the Philadelphia Bell of the World Football League under head coach Willie Wood, a Packers teammate and fellow member of the Pro Football Hall of Fame who said of Adderley’s playing days: “He was more athletic than anybody we had. A lot of killer instinct in him.”

Adderley’s legacy will live forever in Canton. Here are reactions from others around the NFL:

I am saddened to hear that Herb Adderley has passed. He was such a great, great player. When we got him at the end of his career, he became the glue in our defensive backfield, the final piece to our first Super Bowl win. Rest easy. Condolences to the entire Adderley family.

Herb Adderley, a member of six championship teams with the Packers and Cowboys, and a described as the game’s greatest cornerback, died Friday. He was 81. pic.twitter.com/YoX85oAHUQ

Herb Adderley, a member of all five of Vince Lombardi's championship teams & one of the greatest cornerbacks in the history of the NFL, has passed away at age 81. https://t.co/JmEOScb1CP

"Strength. Speed. Leadership. He had it all."

One of the largest trades ever made in NFL history occurred on Halloween Day in 1987.

Structures to be demolished as Hall of Fame Village project proceeds.